The following is an article written by Kay Hughes about Mr. Fern, headmaster of Hathern School 1906 -1938. 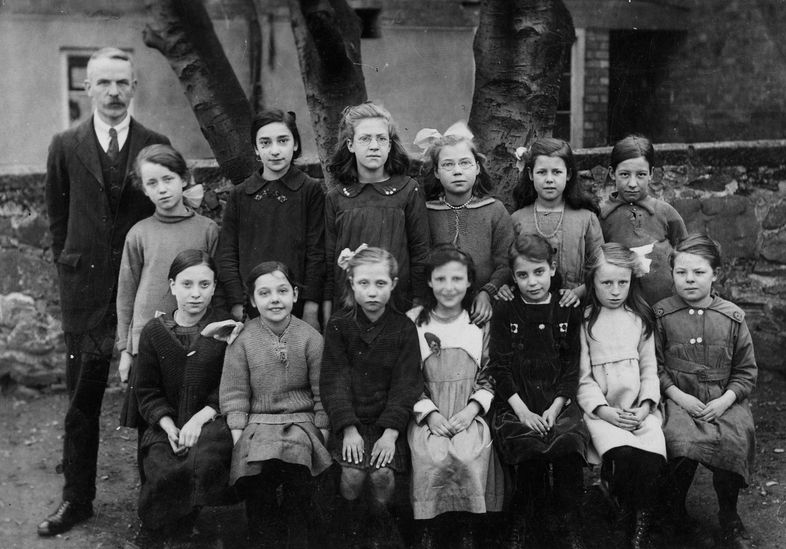 Edwin Fern was born in Whitwick, Leicestershire in 1878 and was the son of an Innkeeper. He took the position as Headmaster of the Junior School in 1906, and was married and lived in the schoolhouse, now the Surgery Dispensary, with his wife, Constance Dora, in 1907. Mr. and Mrs. Fern had three children, one of whom died; but in the 1911 Census Mary Fern was three years old and Madeleine was one year old. Mr. Fern was Headteacher during the First World War, and later took the school through the amalgamation of the Infant and junior Schools in 1920, when there were 170 pupils. His wife, Constance, worked as a certificated assistant in the Infant department in 1920. The photo opposite shows Mr Fern and his pupils in 1920-21 - the girl immediately in front of him is his daughter Madge. During the time he was Headmaster there was the introduction of school milk in 1929, the school dentist visiting from 1933 and, in 1937, the transfer of pupils aged eleven to Limehurst Senior School in Loughborough. Prior to the transfer of pupils at eleven to Limehurst , older pupils attended the Shepshed Domestic Science Centre in Garendon Road, Shepshed for the boys to learn woodwork and other handicrafts and the girls to learn cookery and laundering. My father remembered doing woodwork at Shepshed with affection.

The school log book of this period shows considerable absence of pupils through sickness. Diseases such as tuberculosis, whooping cough, mumps, measles, chicken pox, blisterpox, smallpox, diphtheria and scarlet fever are all featured, with pupils having to go to an Isolation Hospital if they contracted scarlet fever. Ringworm, impetigo, influenza, colds and sores were regular ailments, often transmitted to the teaching staff. In 1938 immunisation against diphtheria was offered to school children. Only twenty five sets of parents decided that their children should be immunised. This offer remained into the 1950s as diphtheria was a life threatening disease. The school was closed for several major events during this time, such as the weddings of the Duke of Kent in 1934 and Duke of Gloucester in 1935, King George V’s Jubilee in 1935, the King’s funeral in 1936 and the Coronation of King George VI and Queen Elizabeth in 1937. Every year the school was closed for Hathern Wakes, Loughborough Fair and Loughborough Races. It was taken over by Loughborough Education Authority in 1936.

Mr. Fern was known as a strict, but fair Headmaster. He retired on 31st. August, 1938, having served as Headmaster for thirty two years. He died on 9th. April, 1952 in Grimsby, where his daughter, Madeleine lived. In Hathern his name is remembered in Fern Road, Terracotta Gardens.