The Caldwells : a snapshot of Hathern in the nineteenth and early twentieth century

From the middle of the eighteenth century ‘Caldwell’ (or derivatives thereof) was one of the most common surnames in Hathern.  In this extract from from the births, marriages and deaths on this website you can see around 200 references to Caldwell or Caudwell or Cauldwell etc. Note that the dates of birth in these records are baptism dates and in some cases the record notes indicate the age of the child when baptised. For example there was a very special day on June 15th 1815 when framesmith Samuel Caldwell and Mary (nee Eldershaw) had five of their children baptised - Robert aged seven months, Hannah aged five years, Louisa aged nine years, Samuel aged twelve years and Matilda aged fifteen years.

The Caldwells come to Hathern

You can see from the Caldwell family tree that the family's connection to Hathern started when William Caldwell (born in Rolleston-on-Dove near Burton-on-Trent Staffs in 1701) and Sarah Hickling (born in Hathern in 1699 but baptised in Long Clawson on December 15th in the same year) married in Loughborough All Saints church in 1727 (source : FHL film no. 592 569, 592 570) . The article in the Echo described below  states that William came to Hathern to work at the Stone House and another farm. 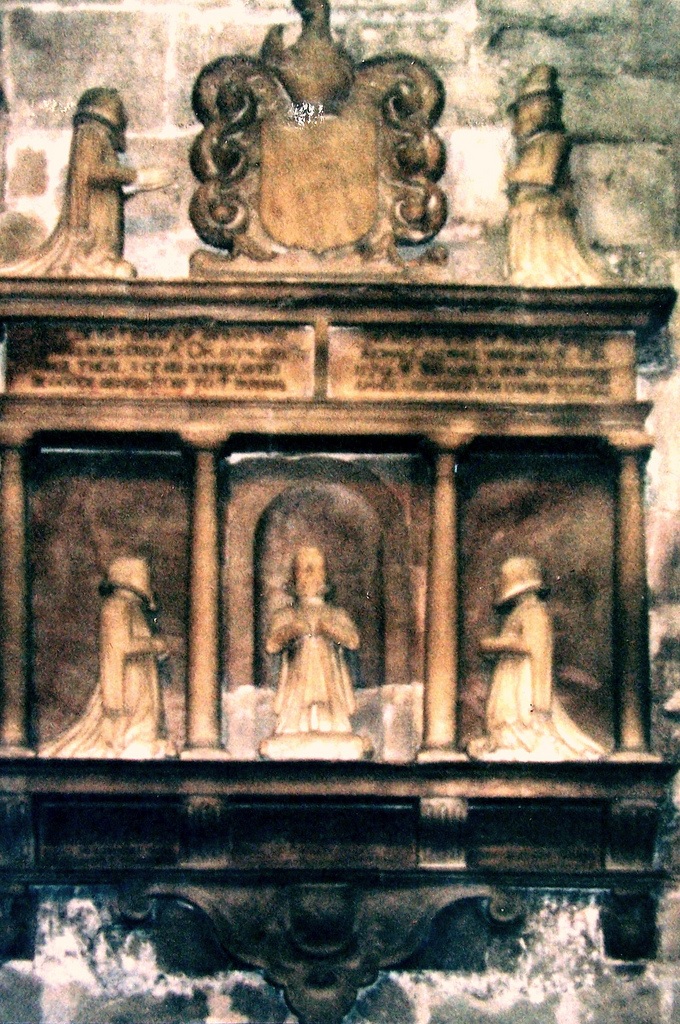 William's family reaches back to the early fourteenth century. The photo shows the family tomb created in 1600 in St. Mary's church in Rolleston. Incidentally there is a hamlet called Caldwell not far from Burton-on-Trent and there is also an earlier family connection to Caldwell Hall north of Burton. Many of the children of William and Sarah died young including twins Samuel and Jane who died at birth in 1740  (the occurrence of twins was to become quite a feature in subsequent generations). However two of their children in particular (John (1732-1806)) and William (1735-1800) married and raised their families in Hathern) and these families and their legacy are featured later in this article.

In the Enclosure award of 1778 only land trannsactions are shown and the single family reference is to John Caudwell who was allocated a three-acre field to the right down the ‘Private Lane leading to Nether Meadow’ (later Pasture Lane). This would be the John (1732 -1806) mentioned above. He had married Elizabeth Cad from Long Whatton in 1756 and they had nine children. In the National Archives there is a record of John's will leaving £300 to his widow (£25,000 in today's money).

The 1824 rates map shows that the Caldwells had become well-established as owners and tenants in Hathern.

Soon afterwards in the 1832 'election of knights' there are two mentions of the family - Samuel - occupier of land "near the Normanton road" and John Caldwell, freehold house and land at "Mount Pleasant" (?). here you can see a complete record of residence records for the Caldwells  which includes the 1824 rates analysis, census  and gazetteer records, electoral rolls and the last entry in 1939 for an Ann E. Caldwell in 155 Loughborough Road.

John married Elizabeth Cad from Long Whatton  on 12/7/1756 witnessed by father William from Rolleston and sister Elizabeth. It seems they had eight children including the following who went on to raise families :-

‘Soon after he was twenty-one he married Ann Caldwell, of Hathern, an active, thoughtful, clear-minded woman, a good manager, wife and mother. And now came the pressure of his business and his inventions. "I worked, and I invented," he afterwards related, and there was not only the pressure of business but the difficulty as to secrecy of his work. So he decided to dispose of his business, and his wife's brother, Samuel Caldwell, being a skilled mechanic at Hathern, they two at that place, took out a patent for a new apparatus to be attached to warp frames. Then followed two or three years of study and experiments in overcoming the difficulties encountered, and a second patent was in 1809 taken out, and this was successful. One eventful Saturday—Mrs. Heathcoat is telling the tale years afterwards—her husband returned home and she enquired, as often before, "Well, will it work?" and his reply was "No! I have had to take it all in pieces again." She was constrained for once to sit down and cry bitterly, for great personal self-denial was necessary, but recovering herself her brave heart cheered and encouraged him, and in a few weeks more the desired result came, and at twenty-four years of age he was the inventor of "a machine for the making and manufacturing of bobbin lace by which means such lace would be made to much greater advantage than by any other mode hitherto practised, at less cost, time and labour, and which he conceived from repeated experiments would be productive of great public utility.* Yet this was one of the most intricate in the whole range of textile mechanism that the world has ever seen’.

For some reason the text of the first patent mentions James Caldwell of Hathern not Samuel. 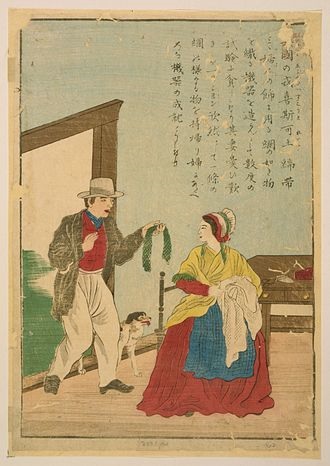 This is  a Japanese print with Heathcoat showing to his wife the first successful result from his knitting machine. It has often been surmised John Heathcoat and Ann lived in the Stone House on Wide Lane for the few years they were in Hathern, hence the recent naming of the adjacent Eldershaw Close. An interesting article in the Loughborough Echo by the long-time resident Michael Forrest explores the evidence and but cannot prove the link. The 1824 Rates Book, described above, suggests John and Annn may have resided in one of the four houses on the other side of Anchor Lane owned by Ann’s father Samuel and wife Mary who  went on to have ten children including those christened in 1815 (described above). 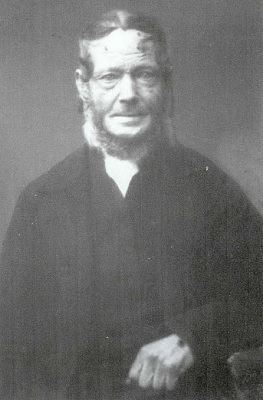 Two legs of the family came together in 1832 when Samuel Caldwell Junior (1803 - 1881) married Elizabeth Caldwell in Hathern. Elizabeth was nine years younger than him and the two shared the same great-grandfather William (1701-1777). Like his father before him Samuel was a framesmith and in the 1851 census we can see the family in ‘Church Street’ which then included what is now Wide Lane. Samuel was a framesmith as was his son Edwin born in 1835.Ten years later the family lived in Wide Lane next to the Three Crowns, and Samuel was now a farmer of forty-one acres employing one man and a boy. His son Edwin took over his father’s role - as a framesmith master employing three men and two boys. He lived in  Church Cottage which he acquired in 1860 from John Cooper of Liverpool and Henry Henson of Loughborough. Later in 1835 you can see Edwin with wife Elizabeth from Sutton Bonnington in the Three Crowns - Edwin is described as innkeeper, grazier and machinist and a farmer of twenty-nine acres employing two men. Clearly a big player. You can see the gravestone of Samuel and Elizabeth and Edwin and other Caldwells in the  churchyard. Another of Samuel and Elizabeth's children was Samuel Wooten Caldwell born in 1836 - he emigrated to New Zealand and married Catherine (Kate) Mcguire in Napier. Their descendants live in New Zealand.

In the 1851 census is the first mention of Samuel Caldwell born in 1824, a bag hosier employing forty men living with wife Maria nee Glover from Mountsorrel a seamer of cotton stockings. Their address was Derby Road near the Dovecote and High Field. Although the census says Samuel was born in Hathern there is no record in our birth records and Ancestry says he was born in Melton Mowbray. In 1801, 1891 and 1901 Samuel and Maria lived on the Green. One of their children was Joseph born in 1852 and he went on to marry Ellen Elizabeth Swift, daughter of framesmith William Swift and Mary Harriman. He was a professional soldier who enlisted at Nottingham in 1870 and had various promotions, campaigned in Natal and Bombay and was discharged in 1882. In 1891, Samuel a framework knitter in wool lived on the Green with Maria. Also on the Green lived Joseph a glove manufacturer and Ellen with sons Samuel and Joseph who both followed their father to become professional soldiers. Unfortunately Samuel was one of the Hathern men who died in the first world war (here is extract from our WW1 display). Samuel was shot by a German sniper whilst lighting a cigarette. His death was witnessed by brother Joseph who went on to live a very full life to say the least. Below you can see a brief synopsis kindly provided by his great granddaughter  in Canada.

'Here are the facts I have: He lied about his age to join his brother Sam in the 9th Lancers ---he said he was 17 but was only 15 As a lowly private in 1905 he was sent to Africa just after the Boer War After he was stationed at The Garrison School in Pochesshoorn Barracked in Broadstairs before he was sent to France as one of “The First Hundred Thousand” as he was a regular. He was made up to Sergeant at Marne Joe was then made a Sergeant Major. He fought at Passchendael where he was commissioned in the field Sometime after that he was taken prisoner in West Prussia. Gran used to tell stories of him having to drink his own urine and eat bugs, at least he survived! He was commissioned 7th March 1917 (in the field) 9th Lancers 1906 to March 1910 - South Africa March 1910 to July 1912 - Canterbury July 1912 to Aug 1914 - Tidworth Aug 1914 - France & Flanders. Joseph left his wife Ann Elizabeth Sunshine and his 3 daughters emigrating to Canada in 1929 with a lady from Lowestoft with whom he had a daughter'.

The last Caldwell in Hathern ?

As stated above, somewhat surprisingly, by 1939 there was only one person with the Caldwell surname left in Hathern - this was Ann E Caldwell of 155 Loughborough Road born in 1891.

With such a large footprint in the village over such a time there are quite a few items in the newspapers about the Caldwells of Hathern . These include court cases, domestic incidents, social events and participation in sports, and sales of property and frames. Also births marriage and death notices, emigration to Commonwealth countries and local appointments as overseers and church wardens. And most common of all incidents of drunkenness. Sadly the last cuttings are about the death of Samuel Caldwell in 1914. All-in-all a fascinating reflection of ordinary life in the nineteenth and early twentieth century.