Where was the Tannery in Tanners Lane ? The evidence 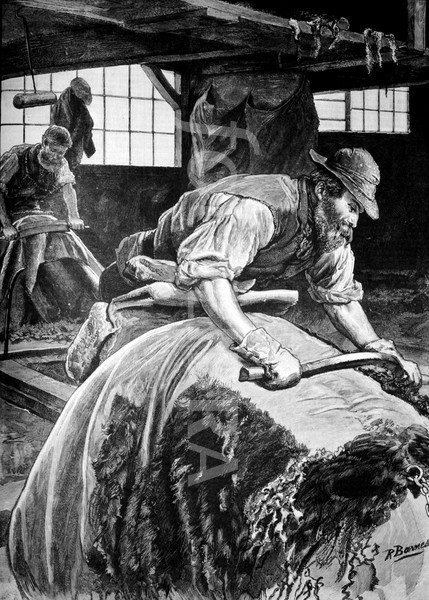 In the mid C19th the last leather tanner in Hathern, Mr. Richard Smith was declared bankrupt and was forced to sell his property and fixtures.This marked the end of a trade that started hundreds of years before.

The history of tanning in Britain. The work of an ancient tanner was unglamorous to say the least. It started with an arduous preparatory stage that could take several weeks. First, the animals skins were cleaned and softened with water. Once cleaned, the tanners still had to pound the hides to remove excess fat and flesh. Next, to loosen the hair follicles, they would either coat the hides with an alkaline lime mixture, leave the hides out to putrefy for months, or soak them in vats of urine before removal with a dull knife (scudding). In the 'bating' stage, tanners worked animal dung or brains into the skins either by beating with sticks or kneading them in a vat of faeces and water.

The combination of bacterial enzymes found in animal waste and the beating or kneading action fermented the skin and made it supple. Understandably, ancient tanneries were always found on the outskirts of towns. With the malodorous preparatory work complete, the hides were ready for tanning. From ancient times and through the 18th century, tanners used a chemical compound called tannin, derived from tree bark and certain plant leaves. Hides were stretched out on frames and immersed in vats of concentrated amounts of tannin. Tannins bind to the collagen proteins in the hide and coat them, causing them to become less water-soluble, more bacteria-resistant, and more flexible. From <http://www.blackstockleather.com/history-of-the-leather-tanning-industry/>

'Pure finders' were the people who picked up dog excrement in the street to sell to leather dressers and tanners. Over the next year, the hides would be soaked in various tanning solutions before the meticulous rinsing and drying out process began. The work was dull, strenuous and very, very smelly. Little wonder that tanners usually married other tanners! By 1900, centuries old village based tanneries specialising in single products had been completely replaced by industrial scale urban tanneries producing a variety of leather products. There is now very little evidence left of these earlier tanneries. Place names are a good starting point. From <https://www.funtrivia.com/askft/Question115674.html>

The earliest references to the tanning industry in the village are in the births, marriages and deaths where quite often the occupation of the father, husband or the deceased is specified.  However the only mentions of tanners in Hathern before the enclosure of 1778 are William Hatherley, Edward and Thomas Berrington and Nathaniel Williams, all between 1641 and 1651.

The next evidence of the possible location and scope of a tannery in Hathern is found in the 1778 enclosure award where the 'ancient lane called Tanners Lane' is first mentioned and shown on a map, situated on the edge of the village (smell avoidance ?) and close to the pastures stretching to the Soar and Dishley. Clues, confirmed below are the adjacent 'Old Yards' (Tanyards ?) and 'Tenter Closes' (Tenter - where animal skins are stretched, see article on 'The Leys'). Definition "Middle English teyntour, tentour, tenture, probably borrowed from Medieval Latin tentōrium "tent, tabernacle, canopy, frame for stretching skins or cloth," going back to Latin, "shelter made of skins or cloth, tent". 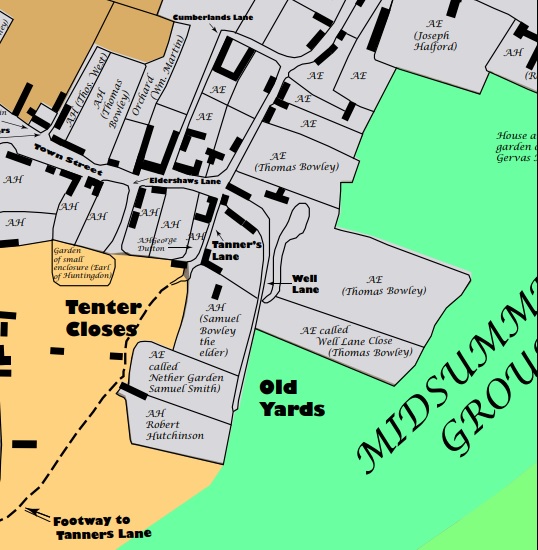 In the pre-enclosure map between Tenter Closes and Old Yards sit the ancient homestead of Samuel Bowley the Elder and the ancient enclosure called Nether Garden in the occupancy of Samuel Smith. Next  to the homestead you can see Well Lane and the 'pond' alongside - the tanning process needed plenty of readily available water. 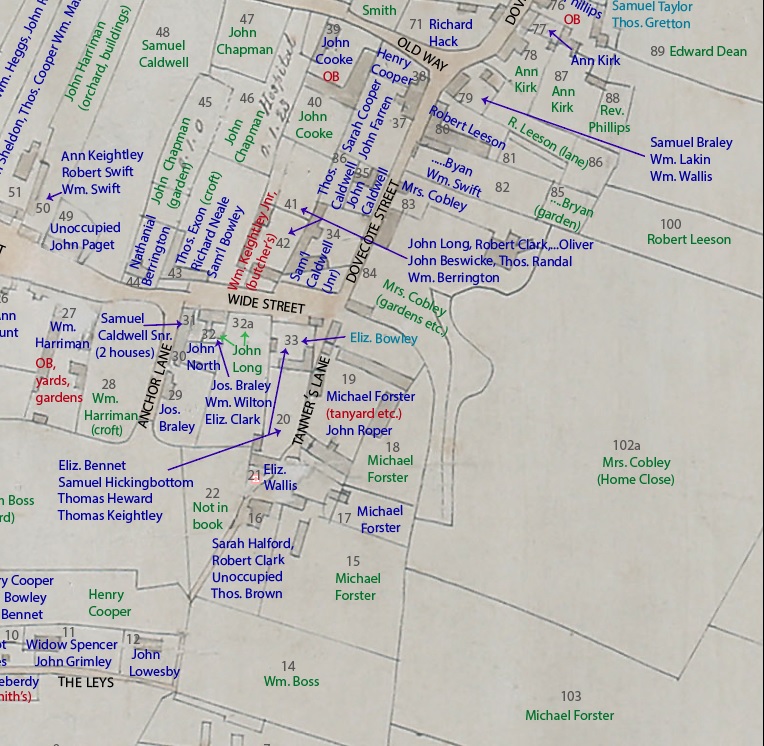 After 1778, Old Yards (1 acre) was enclosed and awarded to Samuel Bowley the elder as sub-lessee of Christ's College Cambridge. Also much of the surrounding farm land was awarded to Samuel Bowley the Elder and other members of  the Bowley family (Gabriel, John, and Thomas) as  lessees or in their own right.  In 1805, Mary Bowley married Michael Foster (their daughter was in 1830 to marry Richard Smith).

This now sets the scene for what we can see on the 1824 Rates Map on which you can see plot 19 running along the whole eastern side of Tanners Lane (though the street names are not shown on the original map). In the Rates evaluation the freehold owner of the plot is Samuel Bowley the younger and the two occupiers are Michael Forster ('house, tanyard, yards, garden etc.') and John Roper ('house etc.'). Several fields adjacent are occupied by the aforementioned Michael Forster who farmed more than  20 fields and died in 1840. The building on or to the south of the plot is 'The Rookery' (later 'Elms Cottages') but where are the names of the residents ? The building on the north of the plot is probably what is now numbers 2 and 6 Tanners Lane (was 2,4 and 6) which have three stories and a cellar. In the centre of the plot is a building which may have been the tannery.

After 1824. In the 1832 electoral roll, a Samuel Bowley Foster is listed as owner of houses and land near the Dovecot (sic) and Samuel Bowley owns house and land near the Cross and Pasture lane.In the next few years there are a few mentions of tanners in the births, marriages and deaths namely Oliver Anderson, Thomas Taylor, Thomas Bennet from Sudbury, John Brickby and lastly John Stubbs who is the only one we can see in the later census records and by 1851 he was a framework knitter.  What we do know is that on March 1949 'Richard Smith, tanner and farmer, Hathern' is in a national list of English bankrupts and was scheduled to appear at the Court of Bankruptcy.. Only four years earlier Richard was in a list of members of the Nottingham and Nottinghamshire banking Company (Leicester Journal Feb. 21st 1845). It seems from the following report of the bankruptcy hearing that Richard Smith was in fact from Foremark-Park Derby (in 1843 he won an award for his l year and l month old sow of the Suffolk breed; bred by himself) and in 1846 was on the provisional committee set up to build a railway from Birmingham to the Welsh coast - source Bradshaws Railway Gazette). You can see from the below article that he attempted to deprive creditors of due payment  by passing stock to his brother. On October 10th 1849 the Derby Mercury reported that the certificate of bankruptcy would be suspended for eighteen months as a result of 84 creditors signing a petition stating that he was a steady respectable man and stating their confidence in his moral character.

After the bankruptcy. Below you can see extracts from local newspapers advertising the sale of property and fittings and equipment from the tanning business and finally an extract from the first OS map in 1883/4.

In the gallery of pictures you can see two aerial photos of showing the relevant views of Tanners Lane and the site of the old tannery.