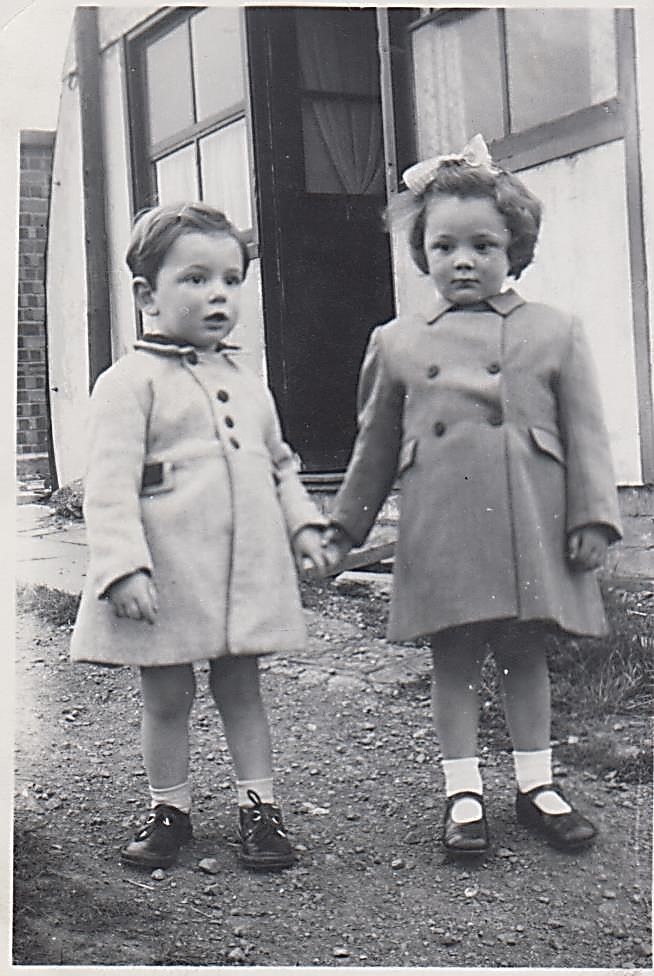 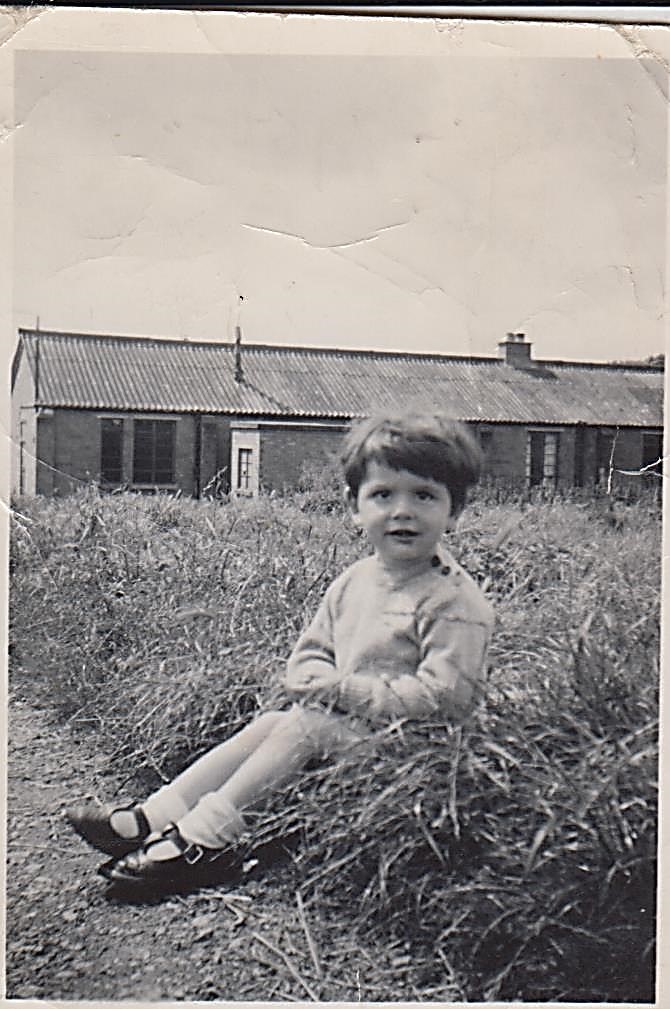 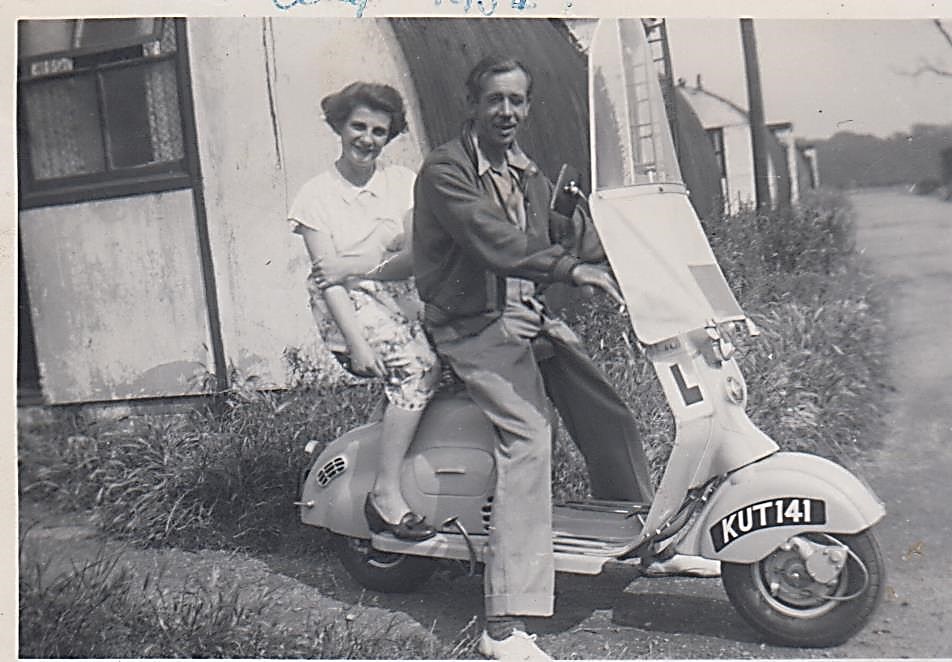 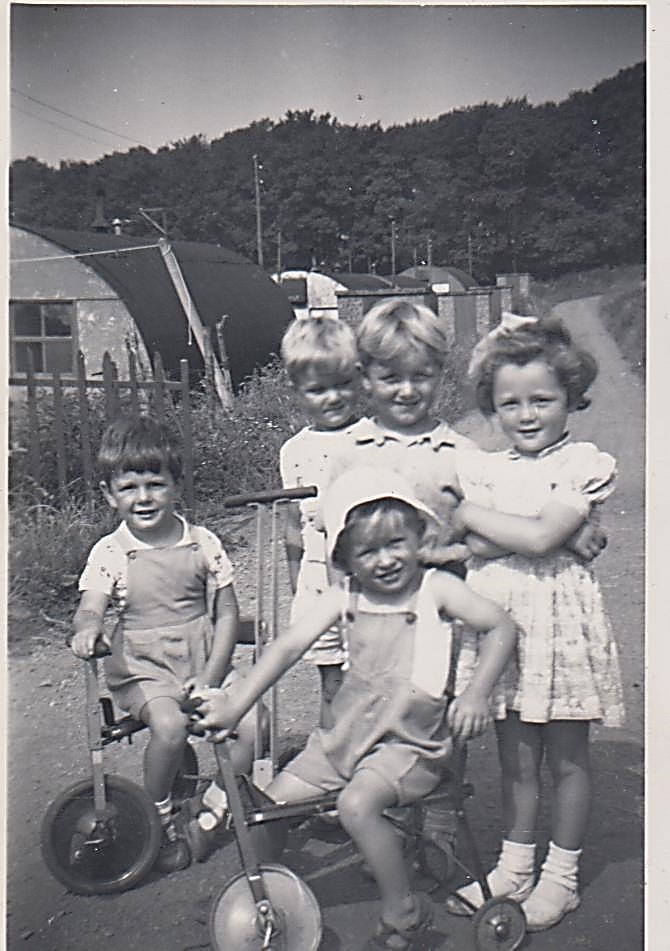 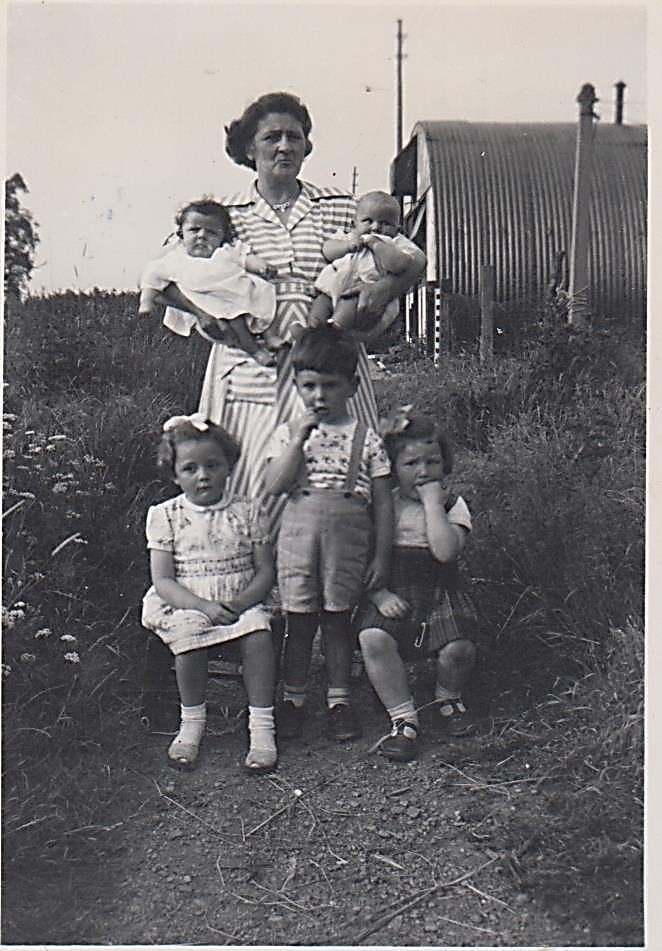 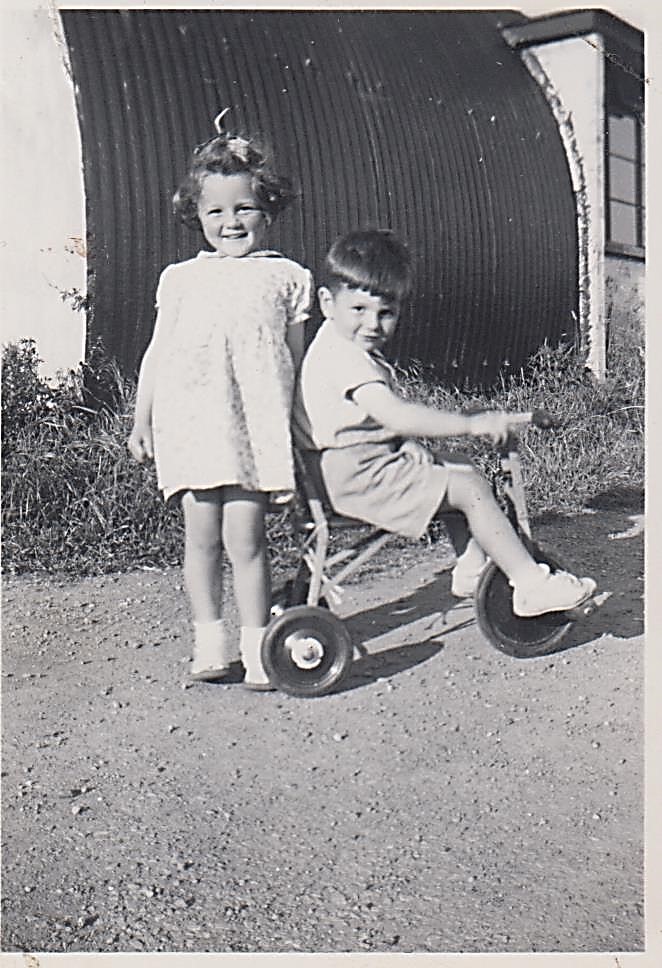 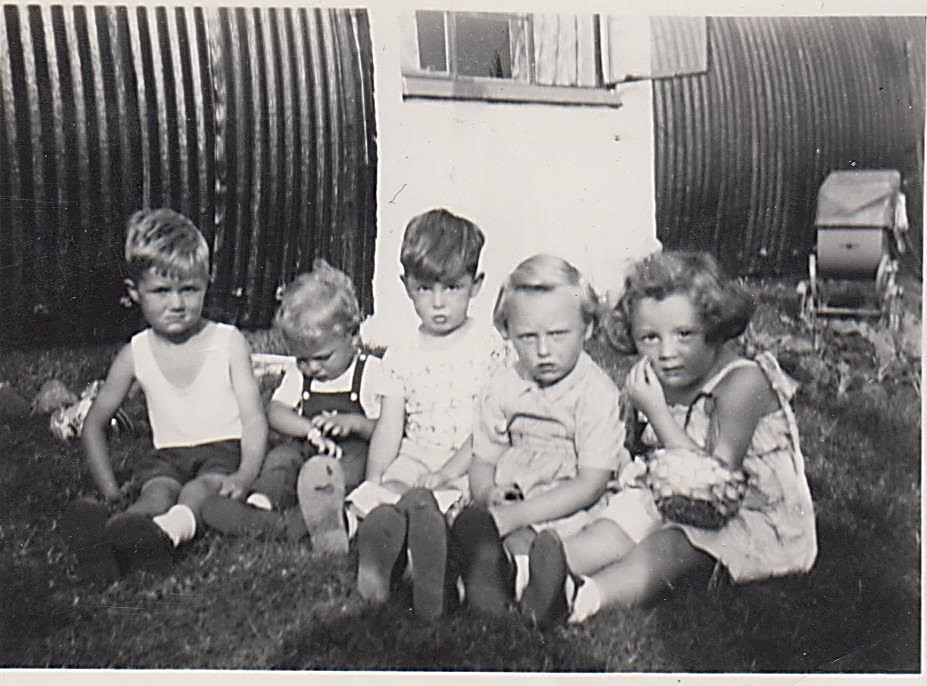 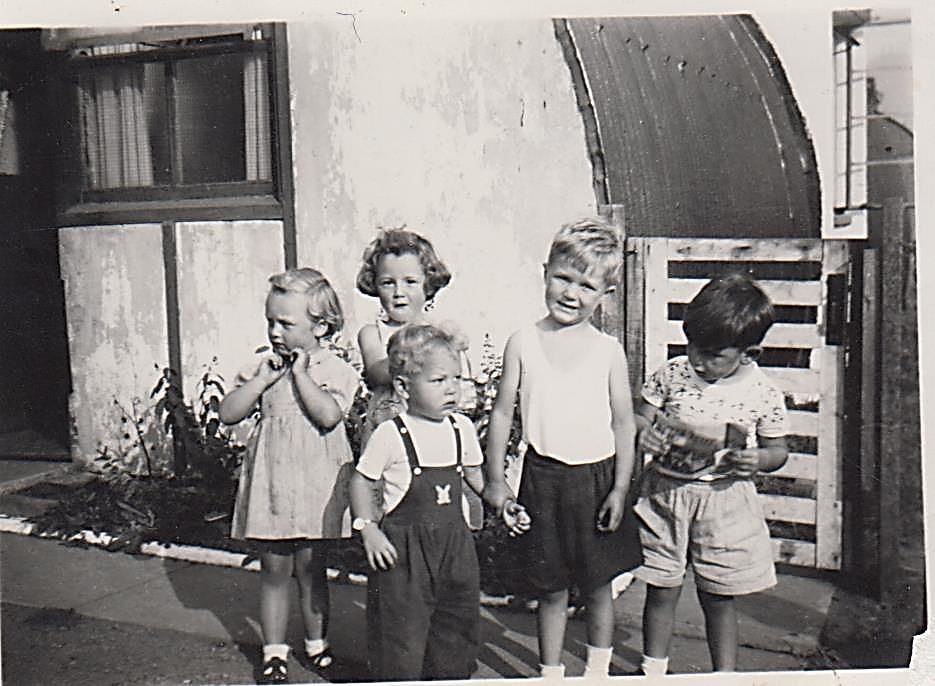 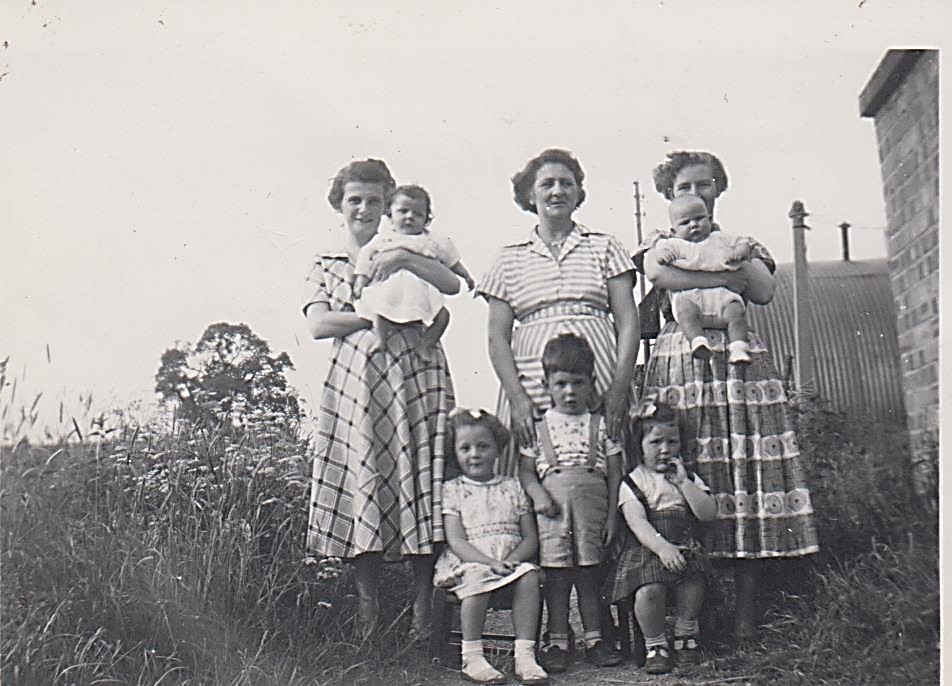 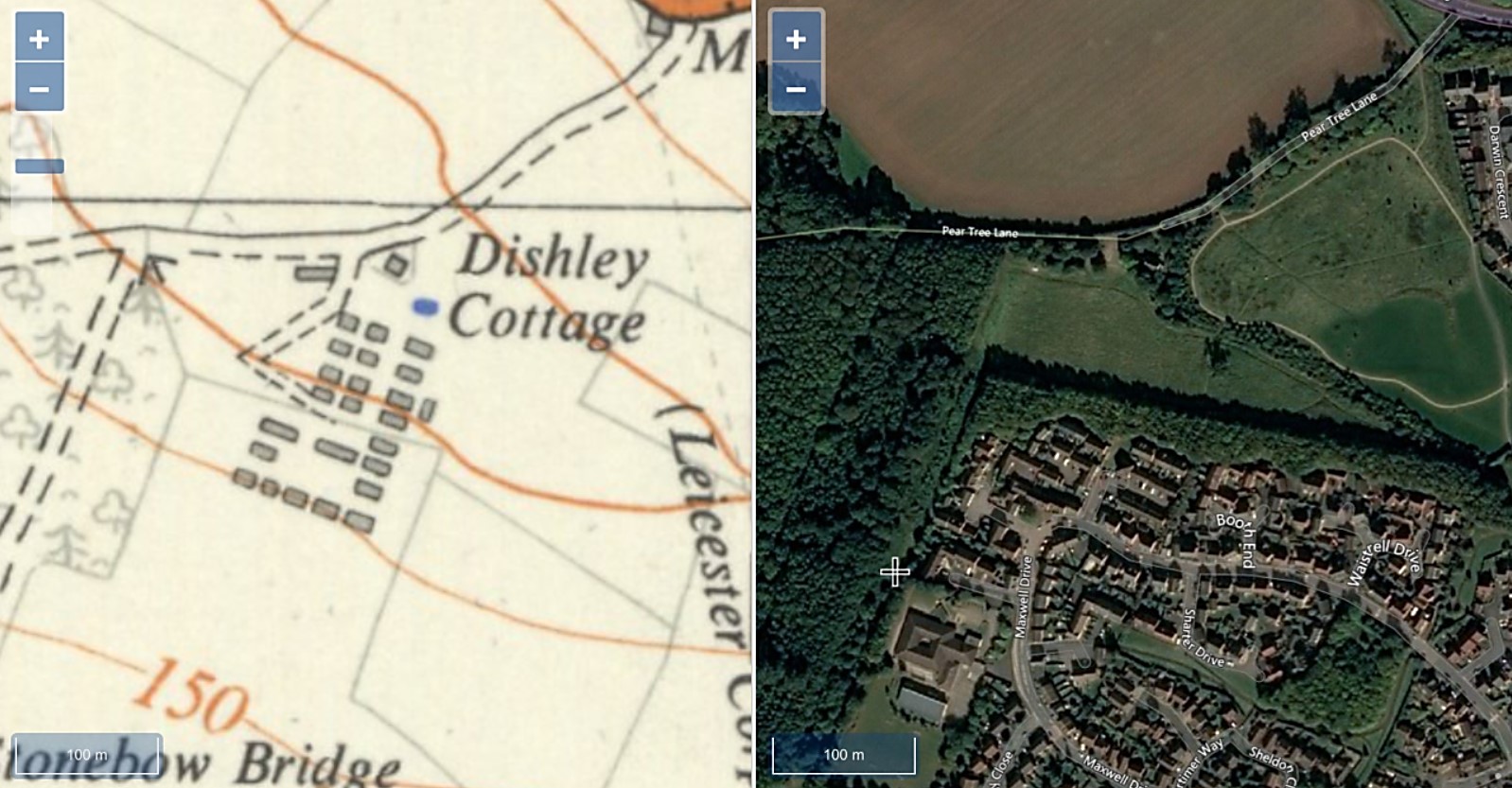 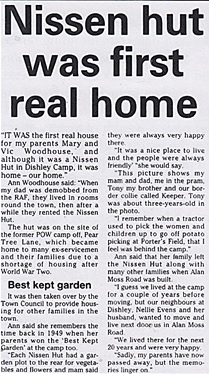 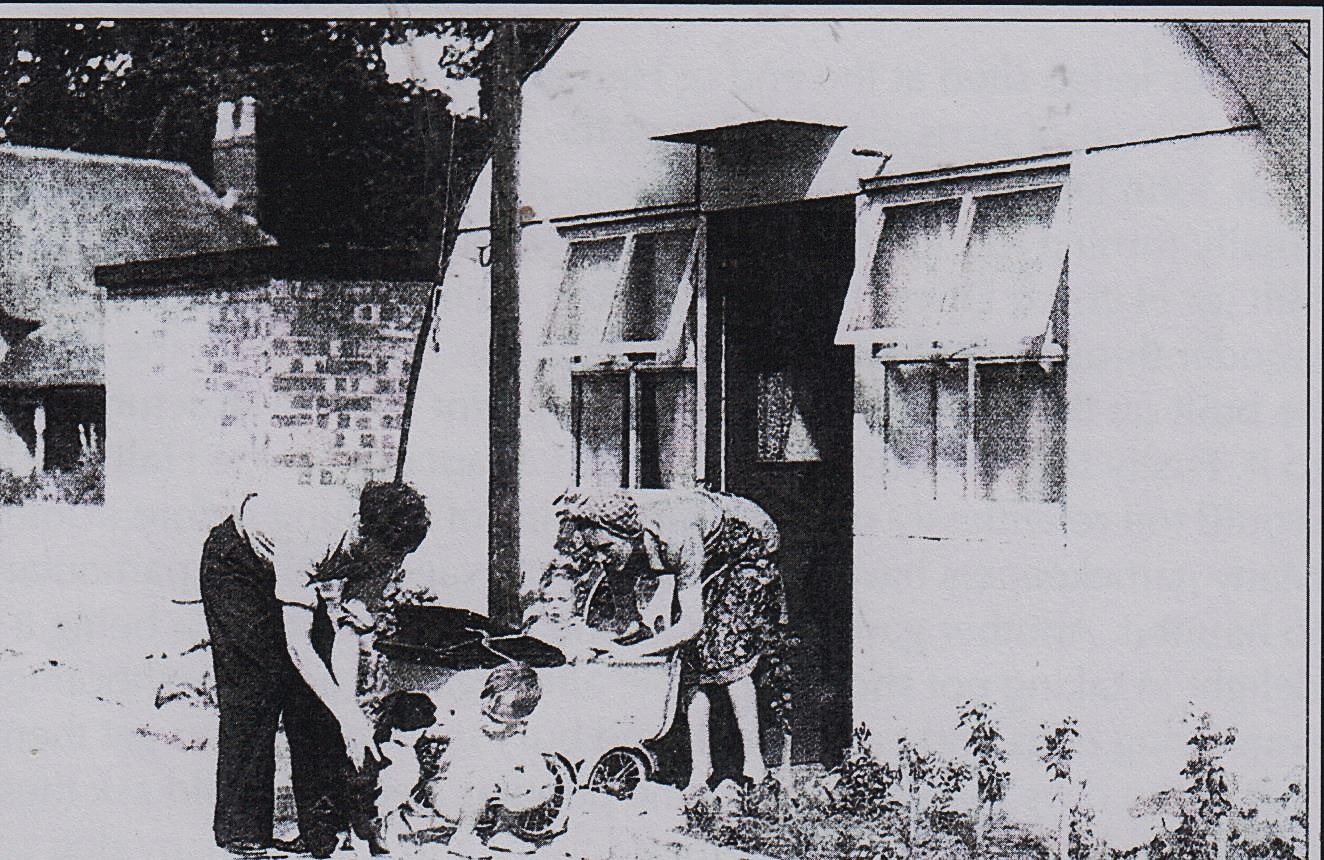 The Hathern Street Directory of 1951-52 listed the residents of the Hathern Bungalow Estate: what was it and where was it?

The "Bungalow Estate" was emergency housing created in 1949 from buildings remaining after the military occupation of nearby Garendon Park during the Second World War. Because so few houses had been built by the end of the war there was a shortage of hundreds of thousands of homes and many such camps were re-purposed to compensate.

The Estate lay on the south side of Pear Tree Lane just beyond “Dishley Cottage” and ran downhill towards the Black Brook.

The corrugated metal “Nissen Huts” and “Ministry of Supply Standard” buildings were originally built by the Pioneer Corps based at Garendon Hall. From 1942 until 1948 they served as Hathern Camp (officially titled Camp 590, one of 1026 similar camps across Britain). The camp held captured Italian servicemen who, perhaps surprisingly, became a regular sight in Hathern and surrounding villages.

At the top of this article you can see a map and views of the "Estate" then and now.

Two local newspaper items about the camp tell the stories of Gary Peters- 'Born at the Camp' and Mary and Vic Woodhouse of Bungalow number 4,- 'Nissen Hut was first real home', behind the Woodhouses' hut can be seen the still thatched roof and porch of Dishley Cottage. Another family who lived at No.13 on the Estate from 1954 were Stan & Joan Pears with their 3 children: Susan, David and Gillian. Susan Worral, nee Pears, who provided the family photos taken outside their home, recalls that their 16 foot by 36 foot 'Nissen Hut' pictured below was very comfortable, it comprised a kitchen to one side of the entrance door with a bathroom complete with a fitted bath on the other. The living room with dormer windows on either side occupied the centre of the hut and was heated by a central solid fuel stove. The remainder was divided into two bedrooms, one on either side. The huts were provided with outside toilet blocks and clothes wash-houses supplied with water from a concrete and brick water tower which until recent years was still visible from the A6 (some pipework still remains), the waste from the camp was piped downhill to a concrete and blue-brick holding tank which remained roofless but still visible in the middle of the field in the 1980’s- (the large Ash tree which now adorns Colling Close near Stonebow School on Maxwell Drive in Loughborough has its roots still embedded in this tank). The Estate with it’s purpose built playground, no traffic and surrounded as it was by woods and fields was a pleasant place to bring up the children of the post war baby boom. The new mothers walked with their children into Hathern to the “Clinic” in the Village Hall to have their babies weighed by the nurse and collect their free allowance of bottles of Concentrated Orange Juice, tins of National Dried Milk and 2 lb tins of (horrible?) Cod Liver Oil and Malt Extract, all intended to provide the children with a healthy start.

In one of the photographs above you can see in the background behind David Pears what was the Administration Block which ran parallel to Pear Tree Lane. It was the last miitary building to be demolished.

As you can see the old camp has been replaced partly by a small park, trees and nature reserve  and by the new housing and Stonebow School off Maxwell Drive in Loughborough.

Very little evidence of Hathern Camp can be seen today except for some demolition rubble and a few concrete fence posts. 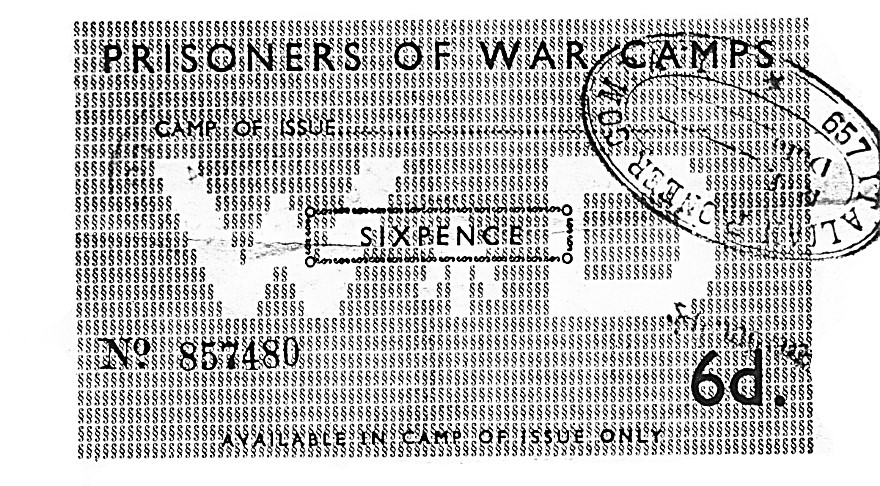 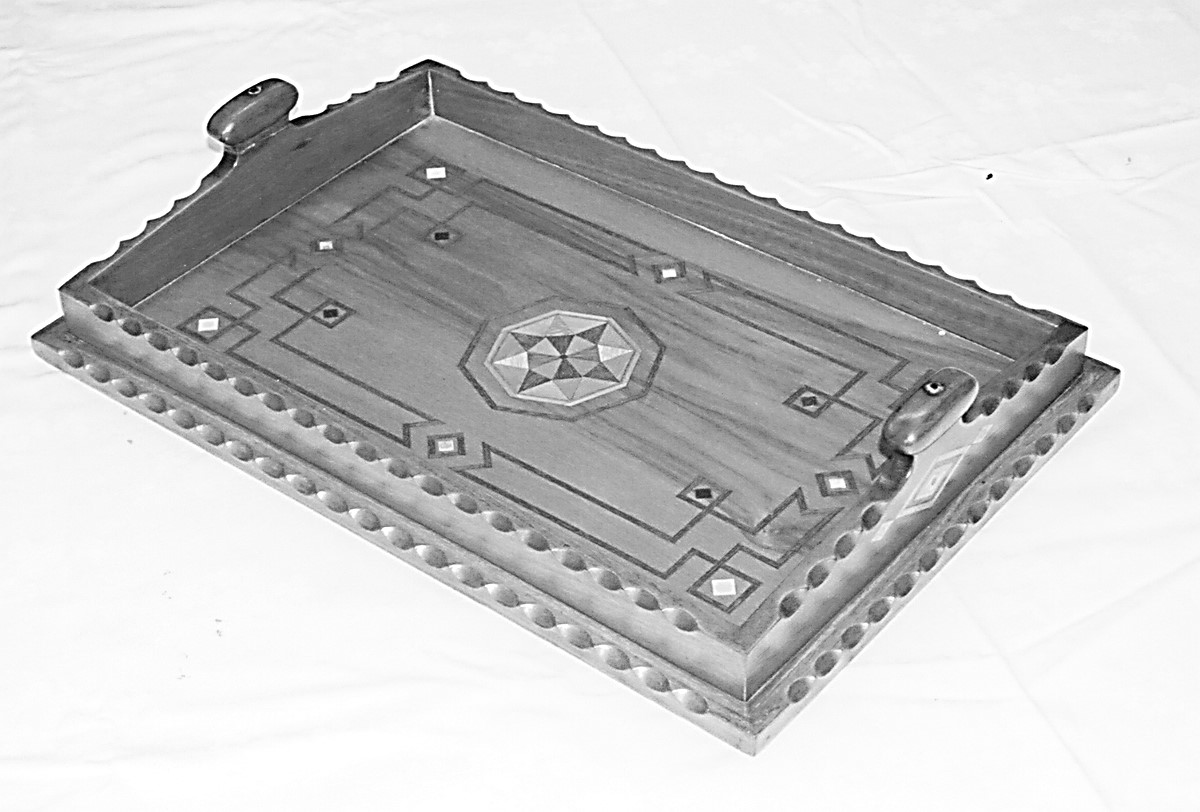 You can read more about the Hathern (Pear Tree Camp) in Chapter 12 of our Hathern at War booklet including photos of POW 'money', an ornate tray made by the Italian prisoners and one of the Nissen Huts. There are also reminiscences about the prisoners working on local farms and in Burrowes' Woodyard on Derby Road in Hathern. The Italians could walk into the village to the WVS canteen in Swift's old factory on the Green and there they would play darts, billiards and cards, they even fielded a football team on the Reccy.

Particularly amusing was Len Hunt recalling he and six other kids including his friends Twitty Swift and Shoddy Bott going up to the camp to play football with the Italians and getting a summons from the police!

Garendon Hall itself and the area around the hall was used as the Headquarters unit for Ammunition Supply, Control and Storage in this part of the county and was the site of a Royal Ordnance Corps ammunition dump until 1951. The TV series 'World War 2 Treasure Hunters' featured a metal detector survey report which you can read in full  Here

This a small extract-

'During WW2 the family were forced out of the house when it was commandeered, and subsequently damaged, by the army. It became No. 32 ammunition sub-depot and was responsible for the handling, storage and distribution of over 30,000 tons of ammunition, ranging from small arms cartridges to mines, artillery shells, grenades and even gas shells. This ammunition was stored partly on site, but mainly along the sides of country roads of Leicestershire. At the end of WW2, the depot became a point of disposal for all stored ordnance, with many hundreds of tons destroyed by controlled explosion within Garendon Park itself. The depot was finally closed in c.1951. Garendon Hall was demolished in 1964 and the resultant rubble was used in the construction of the nearby M1 motorway'. 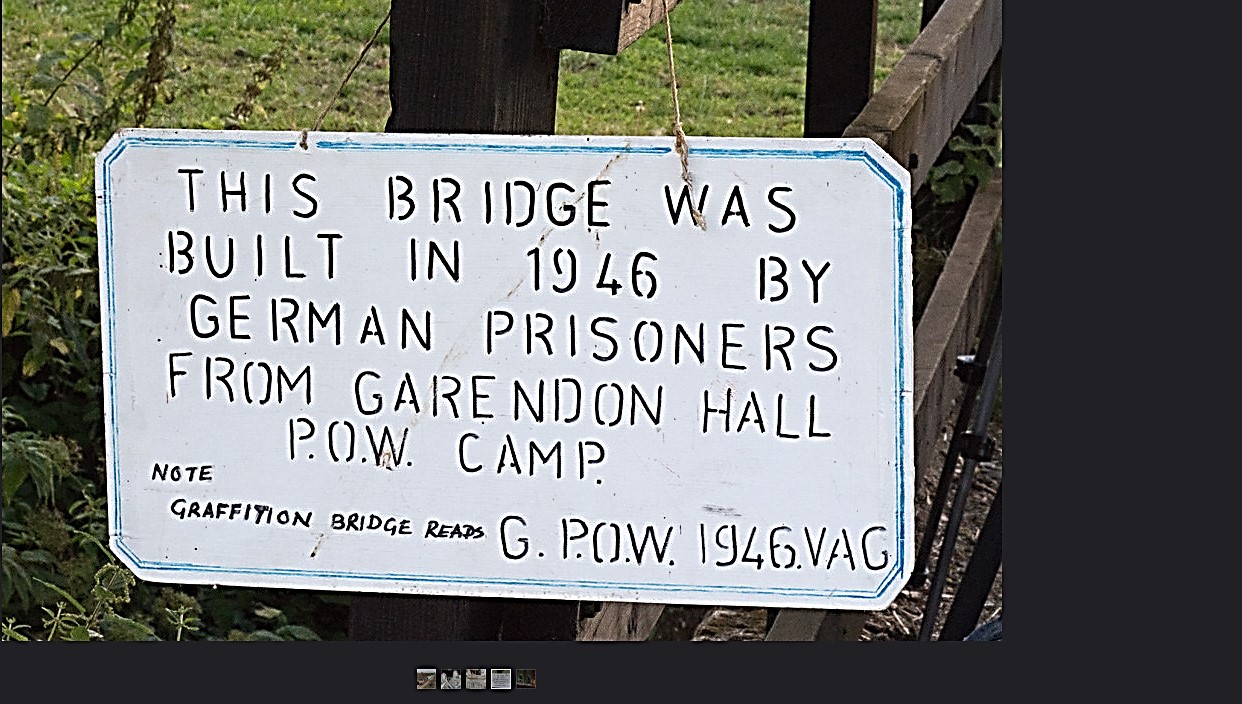 Camp 590 is described as a sub-camp of Camp 28 described below (It was not in the Foreign Office list of camps in 1947 so it is assumed to have been closed by then.)

To the south of the Estate another PoW Camp 28 (known as Garendon Camp or Knighthorpe Camp) was established just north of the now closed railway line alongside Ashby Road. This camp housed German prisoners of war. The site has since been lost to development and is separated by a fence from modern housing and trees. Only a bridge and some German graffiti remain. - An entry in the planning investigation for the new housing read 'The HER and aerial photographic survey record the locations of two Second World War prisoner of war camps within the Site, one within the Registered Park and a second in the east near to Pear Tree Lane'. You can see more details here about camp 28.

Pictured below is an Italian record of Camp 28 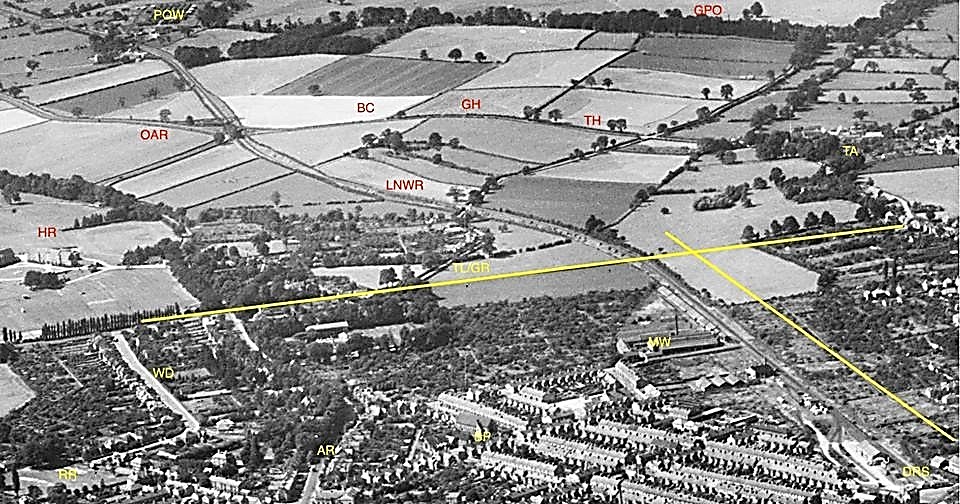 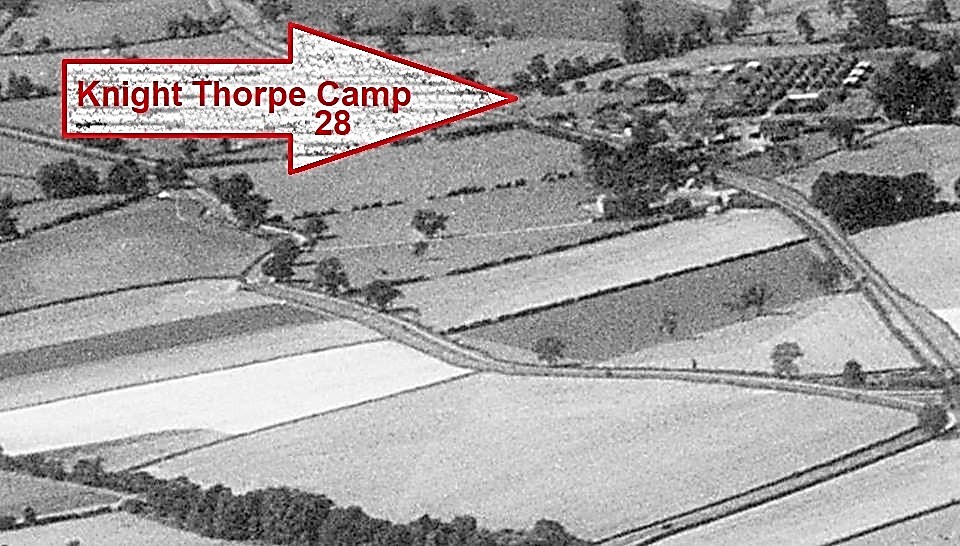