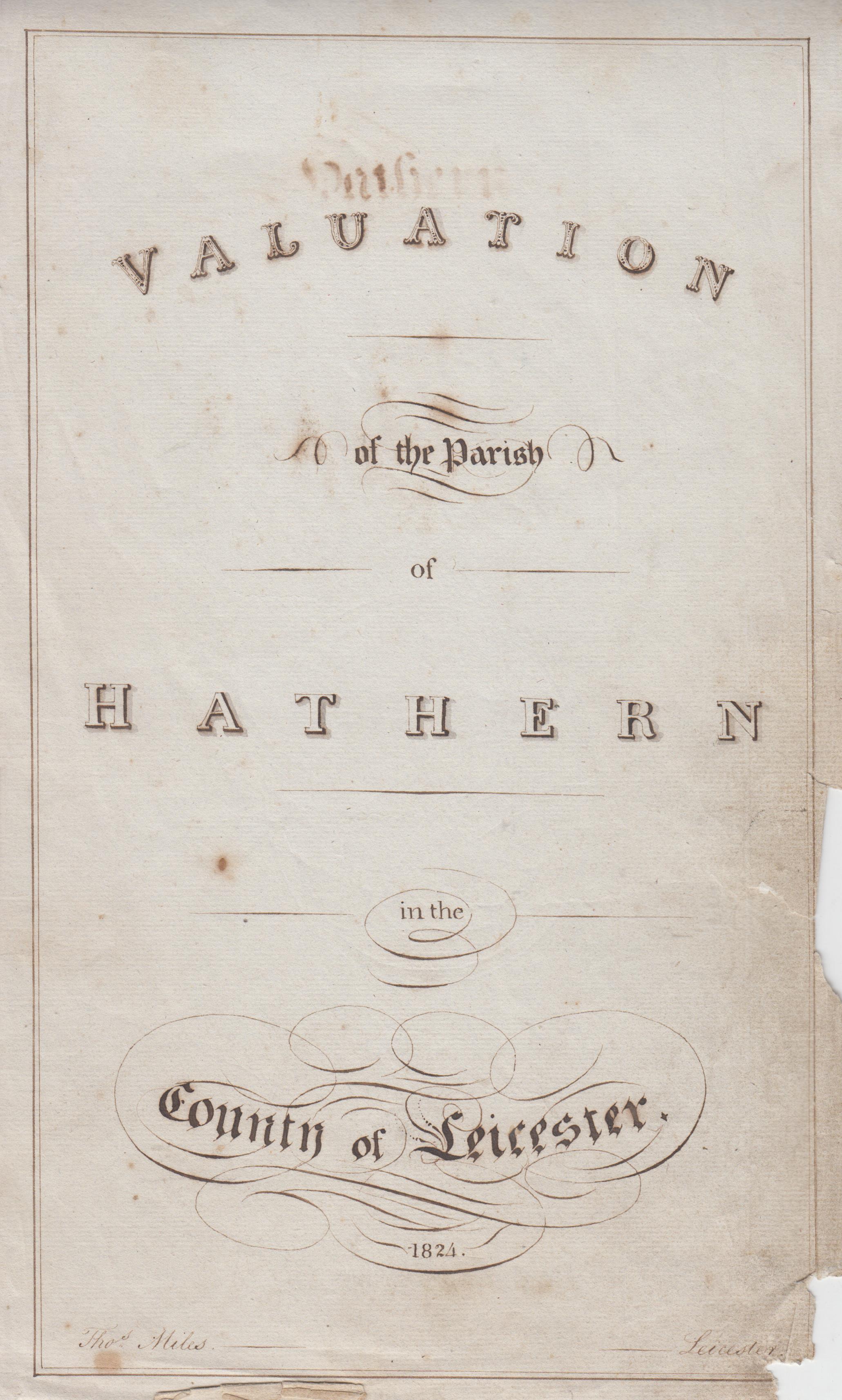 On 12th May 1815, an Act was passed for the easier assessing, collecting and levying of county rates. This made what looked like a hopeful beginning of reforming some of the anomalies and absurdities previously in operation. A universal system of valuation of rateable property was proposed. This was designed to ensure that the county rate would henceforth fall evenly on different parishes within a county, and also that a uniform system of valuatlon should be applied within each parish (From :- Taxation in Britain since 1660 by R.Douglas).

The original Rates Valuation book fo the Parish of Hathern for 1824 was passed to the History Society by Mrs Sheila Swift in 2016 and has been transcribed :-

Valuation covers plot numbers 1-443. A few are missing but some are split (e.g plot 252 and 252a) so in total 462 plots. IMPORTANT FIND. An undated estate map was subsequently found in the Records Office which appears to be the one that corresponds with the Rates Book i.e it contains the plot numbers used in the evaluation though maybe the map was not necessarily produced at exactly the same time. However this is still an resource as it gives us a very good idea where everyone lived in 1824, 47 years after the Enclosure award. Due to the size of the map of the parish it is shown in in 4 separate links :-

From the evaluation document and the rates map we have been able to produce this map of the village in 1824.

The following information is provided for each plot :-

(1) Type of ownership (“tenure”) i.e Freehold or held as Lessee to Christ’s College, Cambridge or Wyggeston Hospital.
(2) The Occupier (there are 176, some renting from several different owners), or “Unoccupied” (1) or “In Hand” i.e to the Owner.
(3) The plot description (e.g. “House and Garden”) or blank (if just an area of land). Interesting references are made to tanyard occupied by Michael Forster, Malt Office occupied by John Caldwell, Butcher’s occupied by Thomas Harriman, Committee Room and Smith’s shop owned and in hand by Henry Davenport, Butcher occupied by William Keightley Jnr., Blacksmith’s Shop occupied by William Peberdy, Church and Churchyard owned and in hand by Rev. Phillips, the Anchor occupied by William Boss, a Shop owned and in hand by William Swift, and a Public House owned and in hand by John Wright. In this precis the interesting references are highlighted in red.
(4) The acreage (“Quantity”) in Acres, Roods (4 to an acre) and Perch (40 to a Rood). Total quantity is 1291 acres.
(5) The value per Acre in whole shillings (where plot does not have a house etc..). All except 1 plot are in range 14-44 shillings per acre. Not transcribed.
(6) The Value of the plot and buildings thereon (4) x (5). Total £2132. Not transcribed.

Pages 54 and 55 list the Occupiers of Waste (Common) ground.

All plots are described as “House etc.” and there are 34 of them spread over 11 plots (nearly half of them on 2 plots). Total waste is just over half an acre at a value of £29.

On Pages 61-69 is the Valuation of the Parish. For all occupiers (including those on Waste) the annual value of the land is shown (total £2162) and the Rate levied at 10 pence in the Pound (total £90).

The following are notes made by Dave Neville in Jan 2016 :-

No farms named, however buildings on map which appear to equate to later farms

Was this the start of the farms?

Plots are very different from 1777 plots.