In October 1978 "The Hathern Plan (Draft)" was produced by Charnwood Council as a basis for consulation with the public. It examines the potential for further development within the village. Below is the map that shows the possible future development and enhancement areas. It is followed by a brief summary of the conclusions and proposals. 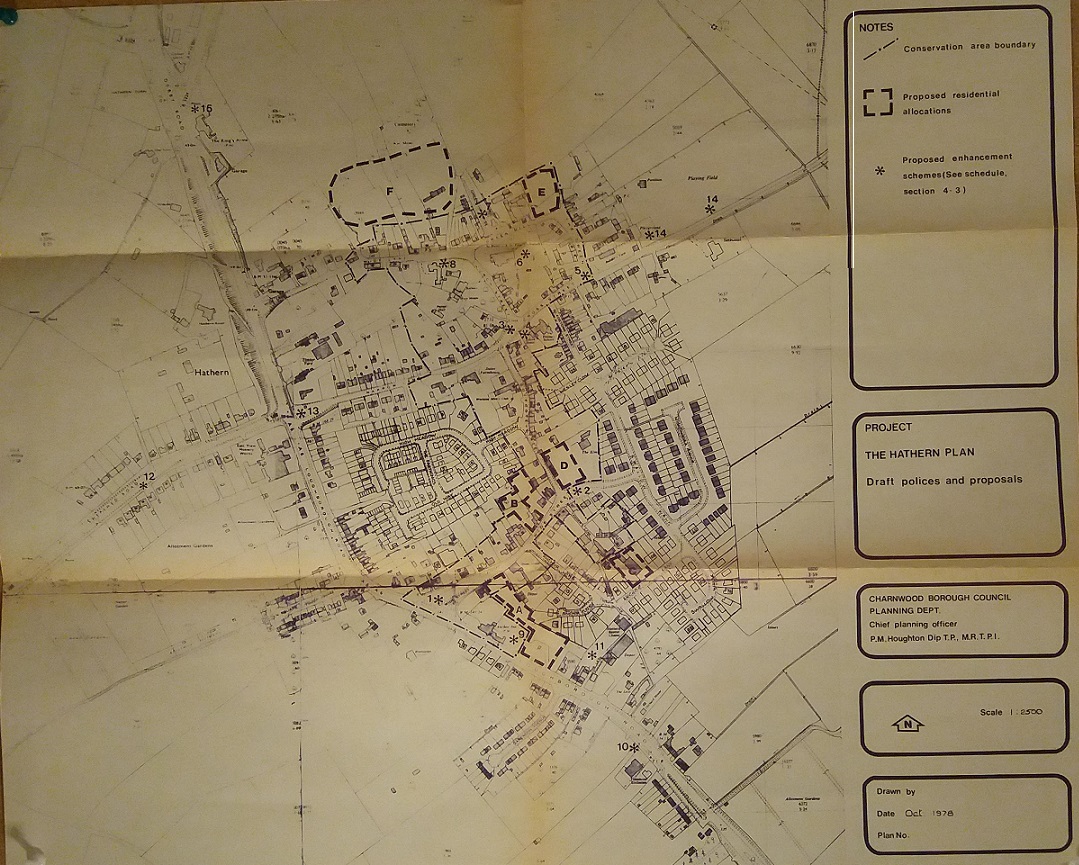 The following is a brief resume of the document.

Section 1 Introduction. This provides the background street layout and historical development up to the designation of the Conservation area in 1975 and lays out the reasons for this plan.

Section 2 Report of Survey. Population structure and housing conditions do not pose any particular problems. Small industries within the village provide a limited and valuable source of employment but are unlikely to show further growth. Level of shopping is adaquate. Heavy traffic along the A6 is a recognised hazard and residents to the west of the Trunk Road are isolated which constitutes a strong argument against any further development in that area. Schooling is in two locations and the Education Authority intends eventually to evacuate the old school and extend the new school. Provision of local facilities (medical, police, post office, library and public transport) are adequate. Planned improvements to water and gas supply will meet future needs.Open space and recreation facilities are satisfactory.

Section 3 Appraisal. The two most recent developments - Anchor Lane / Swallow Walk and High Meadow are said to have "a bland suburban appearance which contrasts with rather than complements the old village ".

Section 4 Conclusions, Policies and Proposals. There is some scope for land allocation but development to the west of the A6 and to the immediate south and east of the village is unacceptable. However there is some scope for development to the north of the village and west of the footpath between Greenhill Rise and there  are some vacant sites which detract from the appearance of the village and these should be developed first. Areas for development are marked A to F on the map.  A further total of 15  areas for environmental enhancement are identifies (see *1 -*15 on the map).