A large proportion of Hathern's population in the C18th and C19th century was employed in framework knitting and farming. Supporting these 2 businesses were skilled craftsmen designing and producing the machinery on which these industries increasingly depended.Most famous of these was, of course, John Heathcoat whose improved knitting machine sparked the Luddite riots. However his connection with the village was fairly short-term. Of much more significance, over a period of about 80 years, was the agricultural implements business Hanford and Davenport whose  company was founded in 1798. The partners were Joseph Hanford born in 1760 and William Davenport born in 1776. Subsequently the Davenport name was no longer used and the business was run by Joseph's son John Hanford and then his grandson Edwin Mills Hanford. In looking at the records it seems that surnames Hanford and Handford are interchangeable. The following document is held in the Library  of nearby Sutton Bonnington Agricultural College. 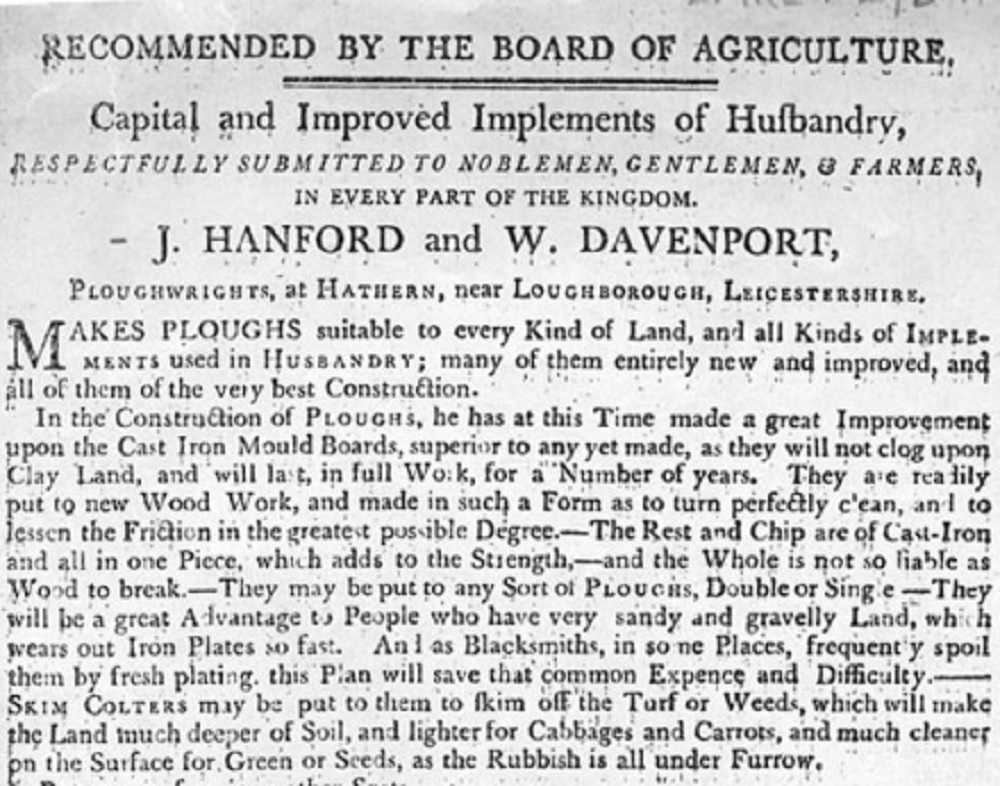 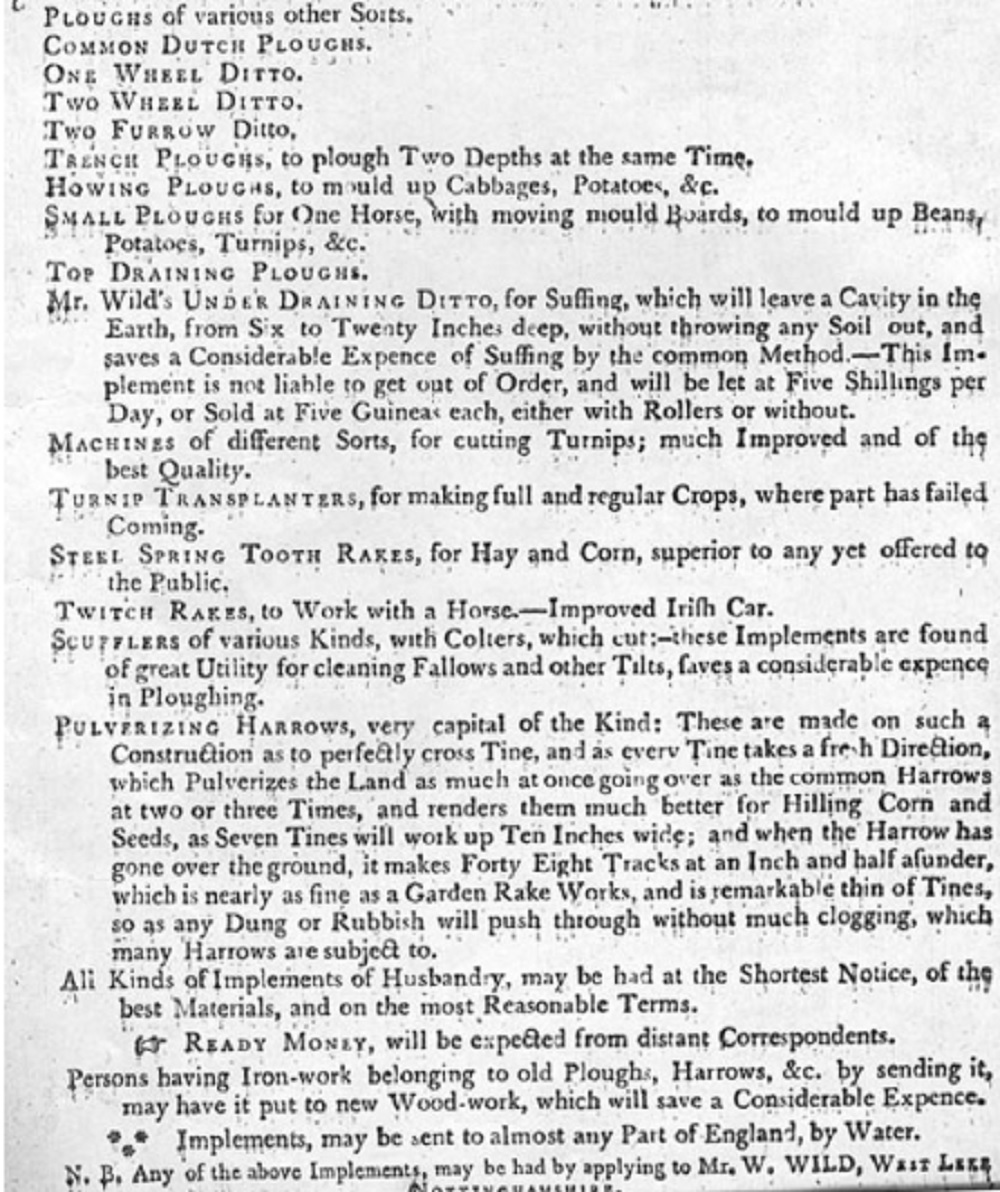 In the early 1800s, the business featured heavily in the Agricultural Surveys. In the Leicestershire and Rutland Survey of 1809 you can see drawings of 15 of their implements and a 5 page advertisement describing the wide range of machinery sold which states that :-

"Implements may be sent to any part of the world, by land or water" but that "ready money will be expected from distant correspondents".

A full list of delivery points included Inns throughout the Midlands as well as London and Manchester and Liverpool (the latter no doubt using the London to Manchester trunk road running through the village).  In the corresponding Derbyshire Survey of 1811-1817, Messrs. John Hanford and Wm. Davenport of Hathern Turn, are listed amongst the  ploughwrights who extensively supply farmers, including the Earl of Chesterfield,  "with this essential article". During this time Joseph Hanford and wife Sarah were bringing up a family and it was their second child John Hanford, born Feb 1st 1792 (see Hathern birth records) who was to take over the reins. Incidentally, the Gentleman's magazine of June 1813 reported the death of Mr. Jos. Handford and on the following day his widow delivered her firtheenth child (ten being still alive). John married Elizabeth Mills from Shepshed on May 3rd 1818. The business seemed to go quiet for a while, though John is shown as a Plowright on the birth and baptism records of his 3 children in the Non-Conformist and Non-Parochial records for Edwyn Mills Hanford, Elizabeth Mills Handford and Henry Martyn Mills Handford. In a newspaper aricle of 1843, a Mr. Hanford, was  recorded as assisting at a Branch Missionary Society in the Wesleyan Chapel Hathern. In 1846, John Hanford of Hathern exhibited a Scuffler at the Annual meeting of the Loughborough Agricultural Association and "all the ploughs except 2 used in the ploughing competition at Cotes were made by Mr. Handford of Hathern".  Following are the 3 entries made in the Non-Conformist records :-

We can see the family of John (Plough Maker) and Elizabeth first in the 1841 census, their 3 children still at home. No street is specified but by association with subsequent records it is Derby Road. Some land was sold in 1846, "N.E. of the Turnpike Road leading to Derby that was actually called Hanford's Close". In 1846 and then again in 1854, it is John who is recorded as an Agricultural Implement Maker. In 1849 Edwin registered and exhibited a new implement he had designed, a double-acting  draught iron plough. By the 1851 census all 3 children have left home and John, Agricultural Implement Maker, now "employed by his son" lives on Derby Road only 2 doors away from his son Edwin, now "a Plowright employing 6 men" who lives with wife Betsey from Normanton-on-Soar. Their wealth was indicated by the presence of a servant. Lodging with them was a Plowright Journeyman.The neighbours on  their other side were, in order, William Pollard, farmer ; Hannah Swift, proprieter of lodging-house  ; Samuel Sutton, Agricultural Implement Maker and William Harriman, Master Blacksmith. It is during this period that Hanson's Agricultural Implements seem to regain their reputation. In the 1854 Leics Trade directory, it is John who is recorded as a maker of agricultural implements. At many of the local agricultural shows, it is farmers and their workers using Hanford products that win the most prizes.

Authors note : In the 1851 census there is also an Edward Hanford, blacksmith, lodging at Mrs. Tacey's on Derby Road,supposedly aged 40 and Hathern-born. He is shown also as lodger in Wide St. 10 yearslater. I can find no more details about him. Also, stopping with Edwin Mills Harriman are Jane and Emma Hanford ("sisters" of the head of the house  born in 1829 and 1833 in Normanton-on-Soar). I can't find these anywhere, though maybe they are sisters-in-law.

Below are some of the newspaper entries mentioning Hanford machinery :- 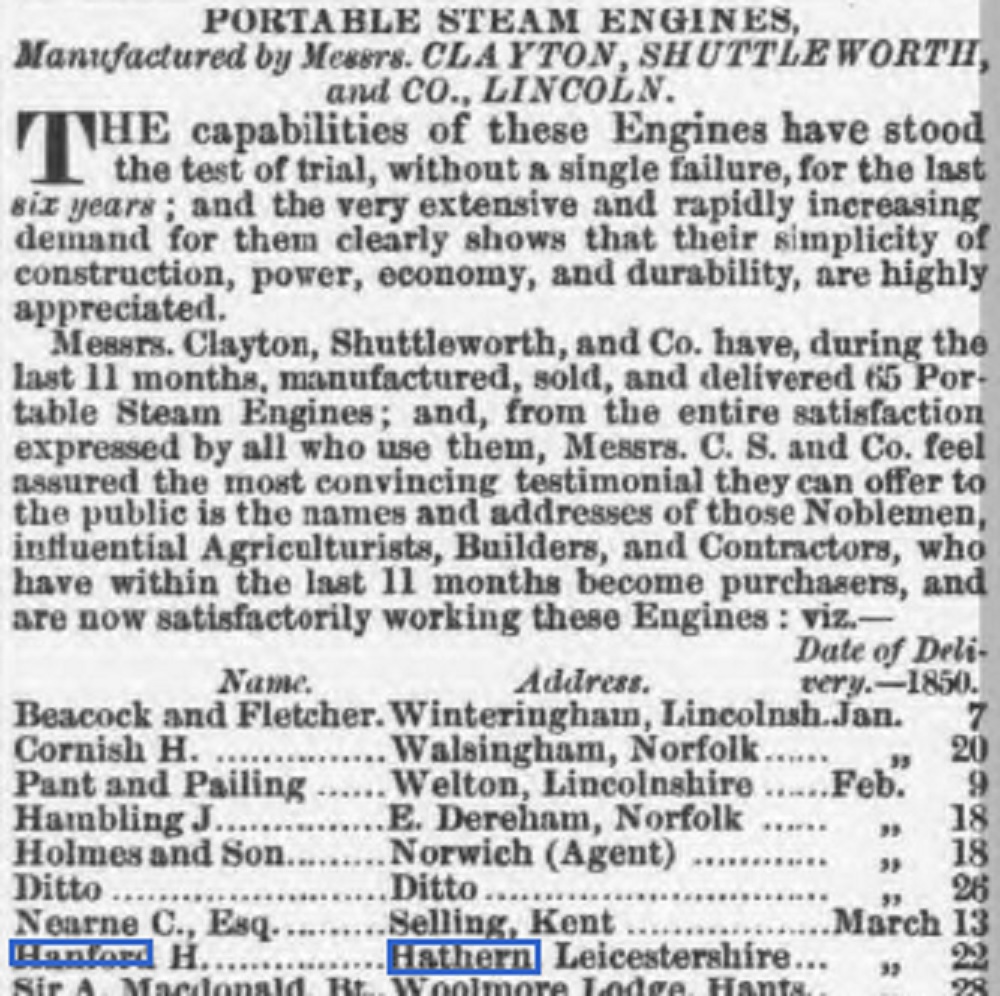 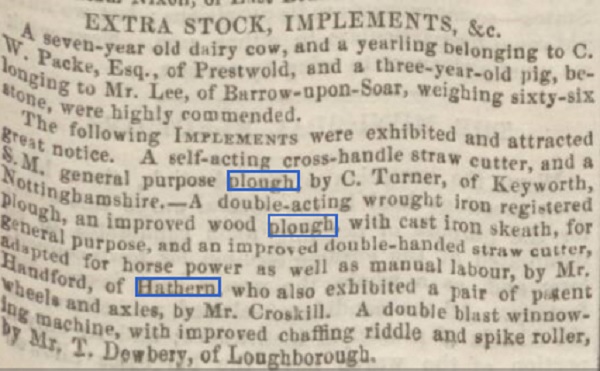 By the 1861 census, Edwin Mills Hanford's business is well-established - he is a "Plowright employing 8 men", still on Derby Road. His father who has moved in with him and Betsey, and is now described as a Retired Wesleyan Preacher.  In the 1863 Leics Trade Directory Edwin Mills Hanford is recorded as as Agriculture Machine Worker. In  the 1865 Electoral Roll, Edwin Hanford is on the Long Whatton list of voters but residence is in Hathern - his father John has by this time moved to Sileby (see below). In the 1871 census, Edward (Edwin?) M Handford is a Timber Merchant  living with wife Betsey and a servant, by deduction still at same address. Incidentally in 1854 there was a fatal accident at the sawmill. Edwin died in 1856 and the following is the headstone for him and Betsey that stands in Hathern Cemetery. 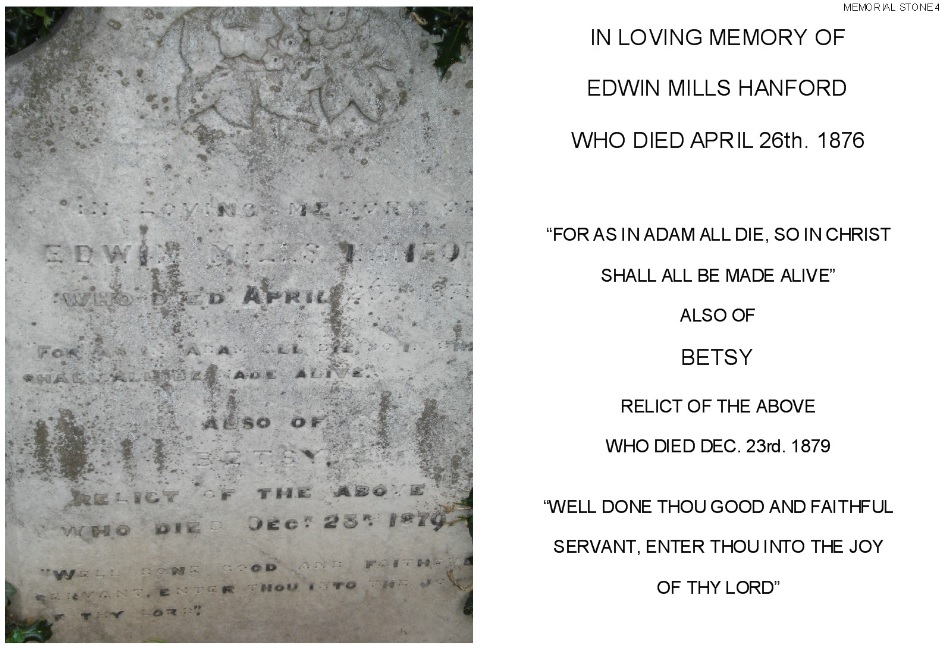 Edwin's last will and testament read "HANFORD Edwin Mills. Effects under £450. Administration (with the Will) of the effects of Edwin Mills Hanford in the county of Leicester Machinist who died 26 April at Hathern was granted at Leicester to Betsy Hanford of Hathern Widow the Relict the sole Legatee".Below is a newspaper article announcing the sale of stock from the business in 1876. Source Nottinghamshire Guardian June 9th 1876. 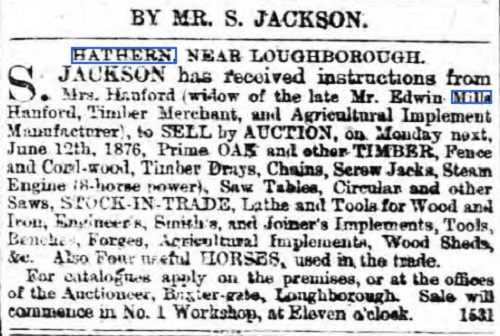 It  may be of interest to see what happened to Edwin Mills Hanford brother and sister.   Both of them married Harrimans, who were of course near neigbours on Derby Road, and several of whom were at various times involved in engineering, as blacksmiths and framesmiths.

Sister ELIZABETH MILLS HANFORD (photo) married John Harriman and raised a family in Quebec House, Sileby and indeed it seems this is where her father John spent his last years, as he is with the family in the Census of 1871 (aged 79). John Harriman died in 1877 and 7 years later his wife emigrated to America with 2 of her 5 children, including Elizabeth, one already being in America. Mother Elizabeth Mills Harriman later moved to The Dalles, Wasco County, Oregon where she died in 1899. 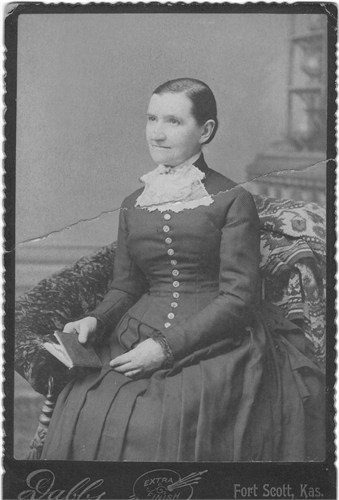 Brother HENRY MARTYN MILLS HANFORD married William Harriman's youngest daughter Sarah J. in 1850 and eventually moved to Leicester where he was a schoolmaster. 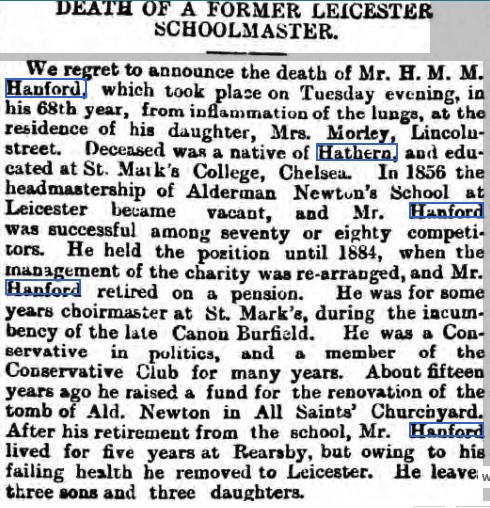