At the corner of Narrow Lane and Dovecote Street you can see the imposing sight of Dales Farm House, one of the houses featured in the 2018 wine walk. This has a long and interesting history. Below, received with thanks, is the result of research by its current residents John and Jane Sorby (and Jane's cousin Richard). 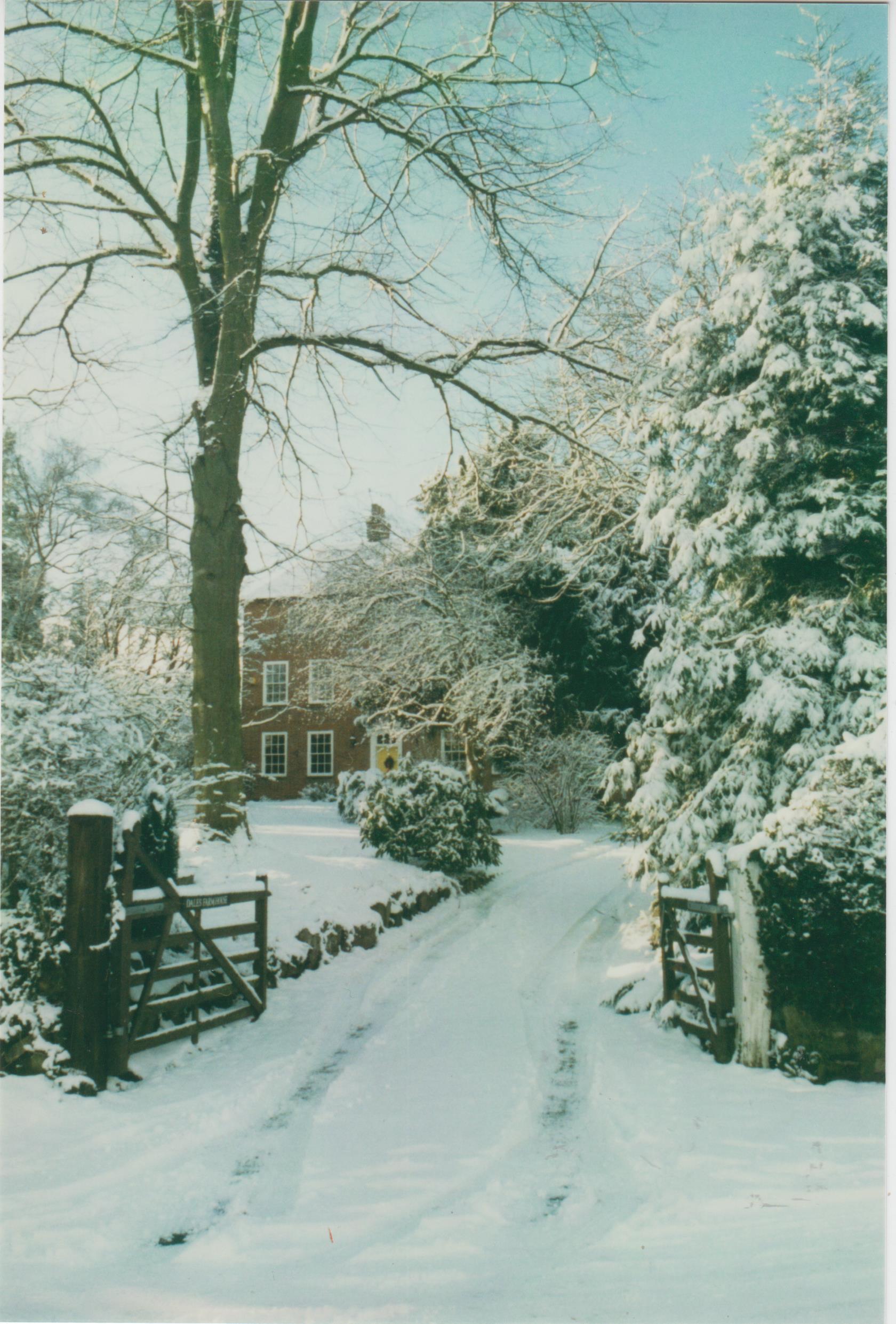 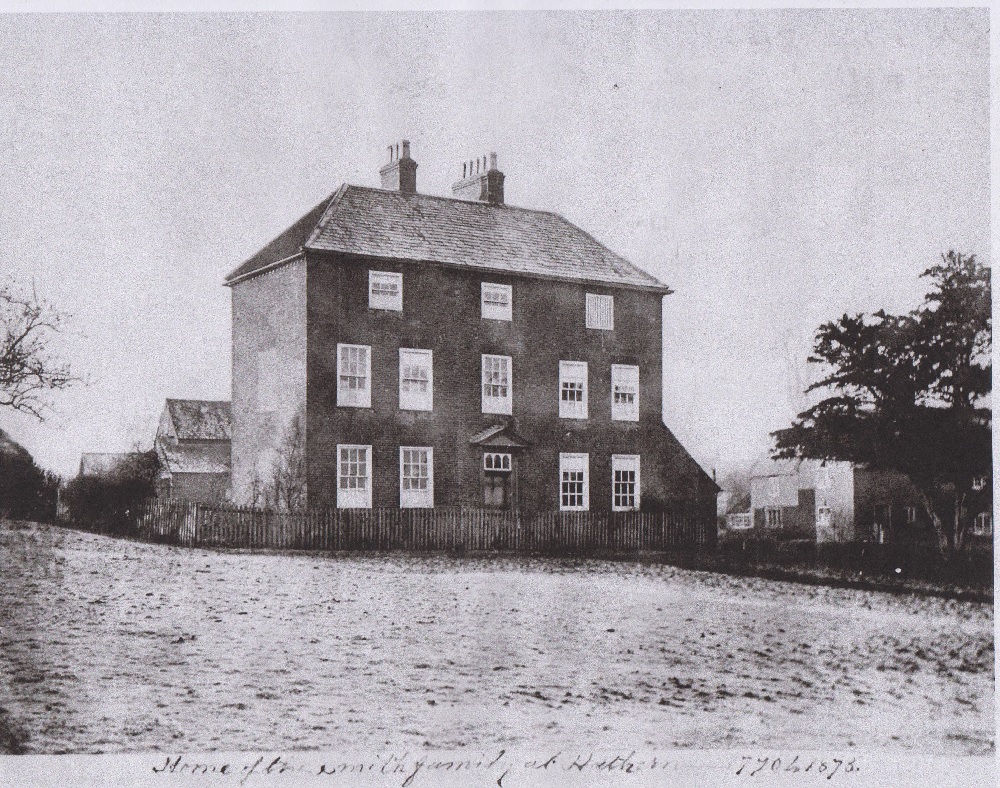 Freeholders list shows William Lowe occupying land and messuage (a dwelling house with its adjacent buildings and the lands appropriated to the use of the household) in Hathern.

Dales Farm House site occupied by Alice Lowe (widow). Assumedly her ‘homestead’ and the ‘messuage’ of William Lowe seen in the 1775 Freeholders List.

Site occupied by Alice Lowe (widow) with substantial additions of enclosed land both within the village and extending over the area previously known as ‘Dales Field’. 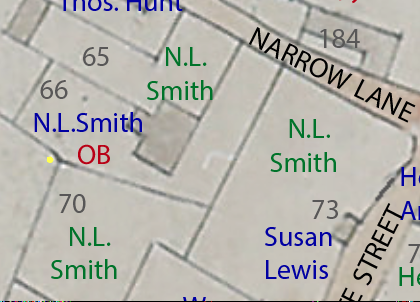 Plots 306, 324 and 325 are shown in his ownership stretching over part of what was Dales Field prior to the enclosures.

In total, he owned.

Samuel Smith, father of Nicholas Loe Smith3 also acquired significant holdings from the Enclosures1 and this 1824 holding appears to encompass both the Lowe and Smith holdings.

NOTE: Nicholas was born just ‘Smith’ and appears to have become ‘Loe Smith’ only after marriage. The implication being that Nicholas’ wife Elizabeth was a descendant of the Lowe family. It has not been possible as yet to verify this however.

Nicholas Loe Smith resident in Loughborough but owning land “near the cross”.

Farm being worked by Samuel Lowe Smith (son of Nicholas)

Elizabeth Loe Smith (daughter of Nicholas), head of house, and Samuel (son) are resident at Derby Road. Elizabeth is shown as being the owner.

Elizabeth and Samuel Loe Smith are resident in ‘The Leys’ retired. Elizabeth is listed as proprietor.

George Groves is shown as tenant qualifying as a voter through “land as occupier” of Dales Farm rather than freeholder. Although in April of that year he is shown in the census as living at Long Whatton.

The will of Samuel Loe Smith, written that year, bequeaths “my land called The Dales in the parish of Hathern to the use of my half-brother Thomas (Gamble) Smith”. Thomas had emigrated to Canada in the 1840’s. This appears to refer to the farm lands occupying part of what was known as Dales Field, prior to enclosure, but not the farm house

The rest of this will is quite a complex document through which the Loe Smith properties are distributed to surviving members of the family and cousins; largely through a sale of property.

Elizabeth Dexter, his former housekeeper, is bequeathed his three houses in Wide Street.

As for the rest including Dales Farm House and The Anchor pub; his cousin, William Cooper is tasked with selling them and distributing the proceeds amongst various Cooper and Atkins cousins according to an arcane formula.

Will of Samuel Lowe Smith

George Groves is farming at Dales Farm. Frederick Russell is a General Agricultural Servant on the farm.

The ‘Farm House’ is now shown as being in Narrow Lane. The farmer is George Groves 67 (born 1814 in Long Watton, died 1898) – described as farming 40 acres. (an area about one quarter mile square) Wife Sarah

Frederick Russell is still a servant on the farm. 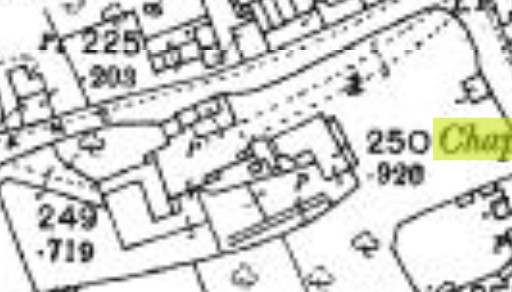 George Groves had died in 1898 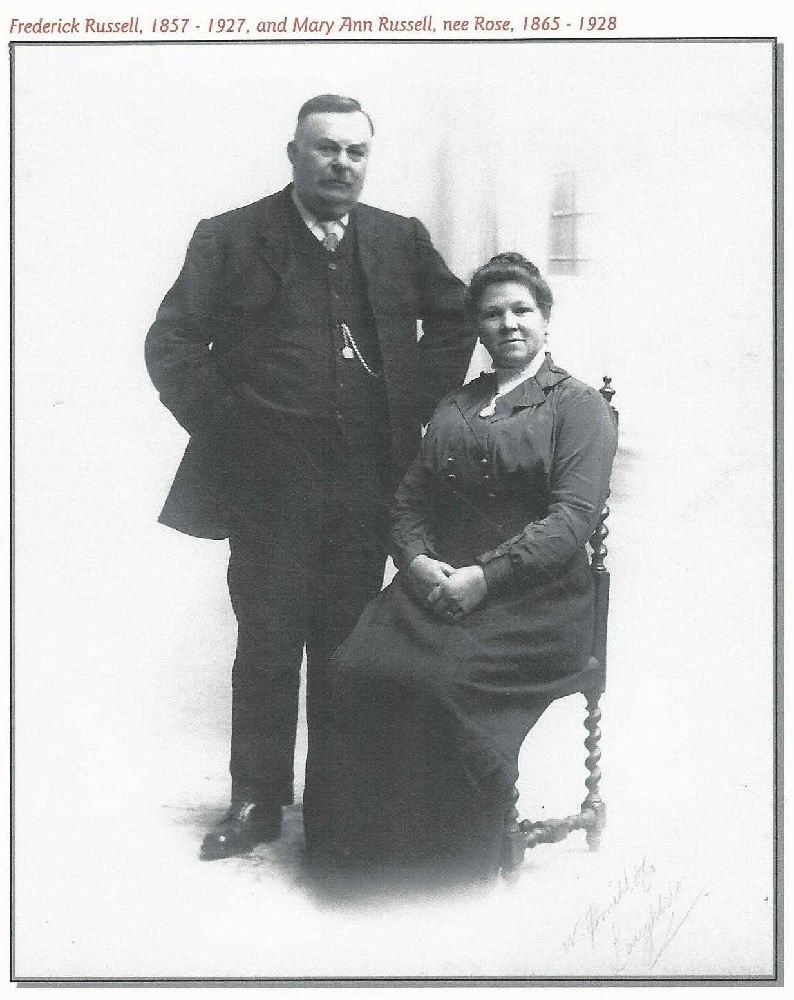 Two daughters Gertrude (22) and Ellen (18) occupied in Griswold Hand Hosiery – a form of home work for a local hosiery company4. An indication that financially times were tough. Although when he died Died 27 May 1927 at Dales Farm Hathern left effects of £1232 to John Thomas Russell (farmer) and William Russell (gamekeeper) – equivalent to leaving £380,000 today

Kelly, in his 1922 directory, says that the area of Hathern is 1330 acres of land and 11 of water. Everard March Phillipps de Lisle, esq., who is lord of the manor, Wigston’s hospital, Leicester, Christ’s College, Cambridge, lord Crawshaw, the rector and the Rev. R. Boyer are the principal landowners. The living is a rectory, net yearly value £396, with residence and 264 acres of glebe, in the gift of the trustees of the Rev. E. Smythies. Hathern was for some time the residence of Mr. John Heathcote, the inventor of the bobbin net machine. 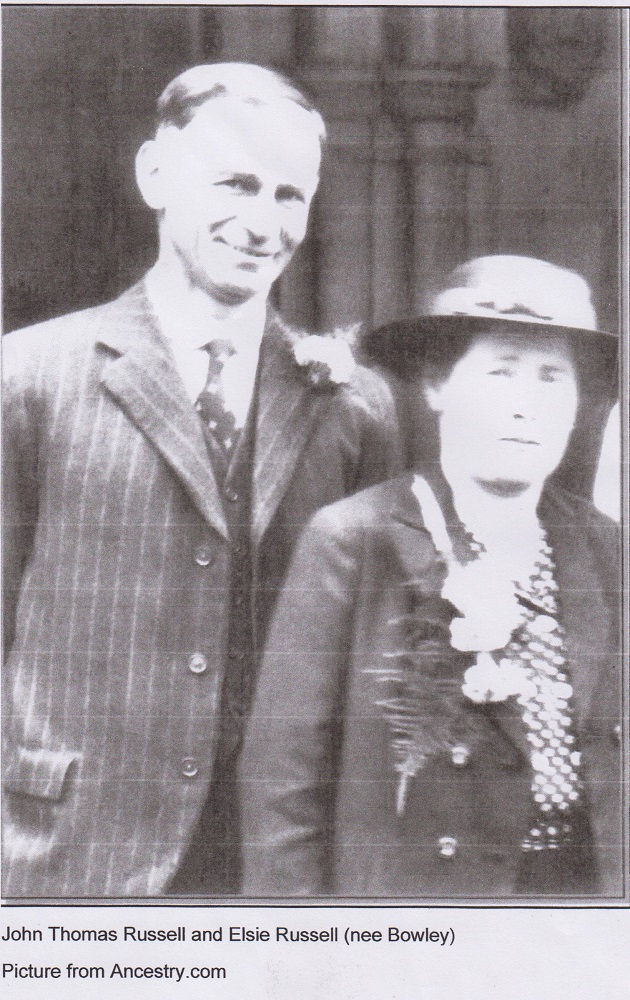 John was killed in a motor accident on 20th March 1946. leaving his estate (but not the farm which he did not own) to his wife Elsie and to his brother in law Harry Bowley3 (farmer on own account in Shepshed). Value of effects £2018.

The landlord of Dales Farm at this time was Peter Paget of Nanpanton6 of the wealthy Paget family5. He became a Major in the Royal Scots Greys and Royal Armoured Corps and was killed in action in July 19443. Left £714,000 in his will.

It is not yet clear how the ownership of Dales Farm came to pass to the Pagets.

In the 1951-52 Street Directory, resident is shown as C.G Hickling (source Hathern History)

.Aerial view of Dale Farm, also showing Narrow Lane, with Hollytree cottage, Victoria Terrace and the Manor House, and in Dovecote Street the house that is now a hairdressers that once was the site occupied by our esteemed watchmaker Henry Spitlte. 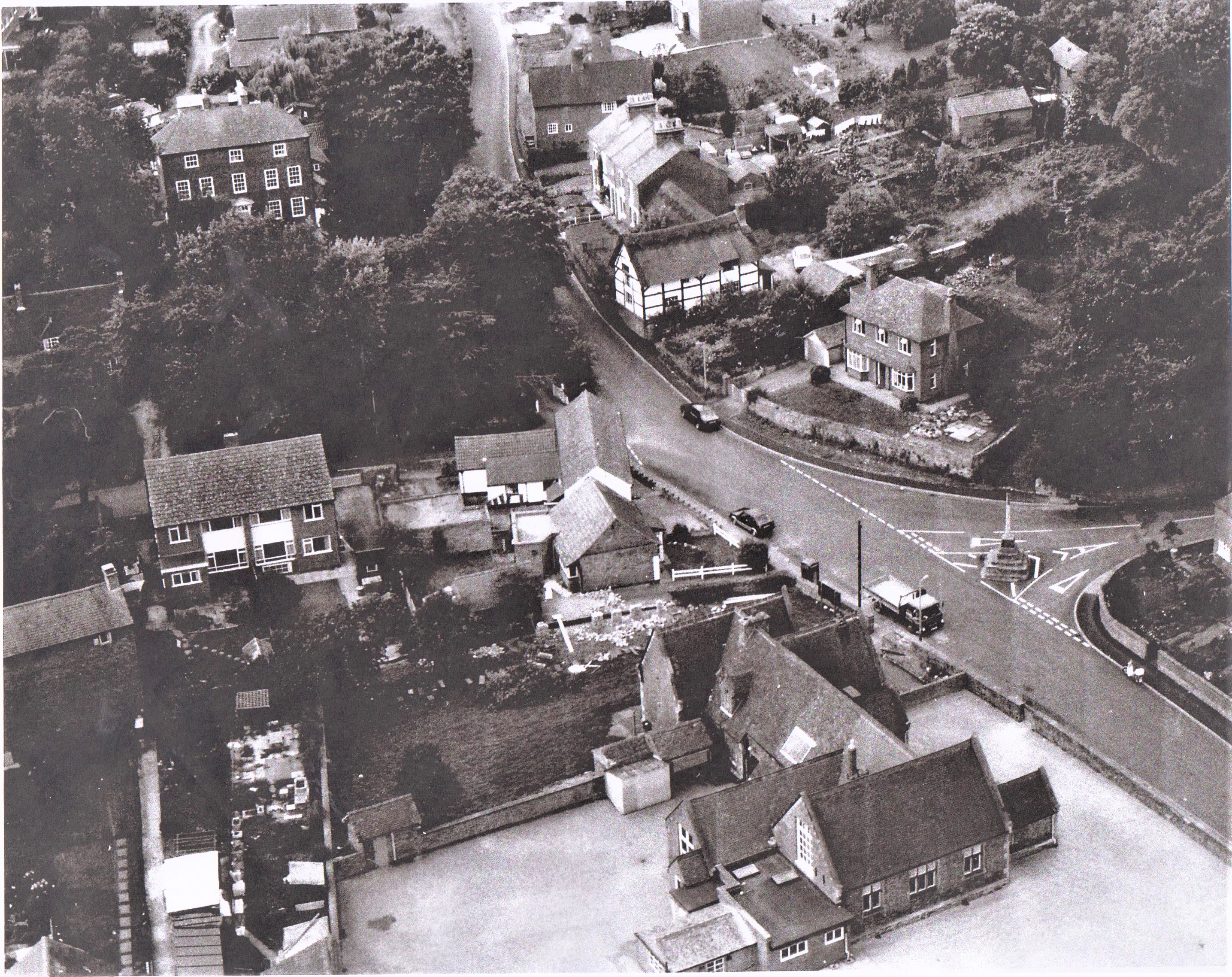