On February 17th 1894 a report in the Nottingham Evening Post described the brutal murder in Argentina of John Palmer Smythies son of the late Rector of Hathern. BUT THAT WAS ONLY HALF CORRECT….One week later the Leicester Chronicle confirmed the victim's name but stressed that Mr. Palmer Smythies was in fact a nephew of the Hathern Rector, John was the son of the Rector's brother John Kinnersey Smythies. However the part played by the Rev. Smythies was very important as he had been vociferous in promoting emigration to Argentina as an answer to the question 'What is to be done with the sons of the middle classes ?'. You can see how the story developed below :- 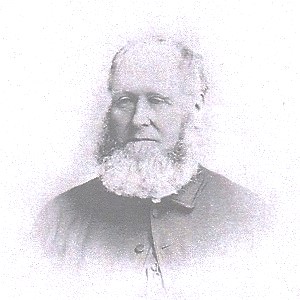 Rev. Edward Smythies (picture shown) earned himself quite a notorious reputation during his period of office in Hathern - as described elsewhere on this website - 'The trials and tribulations of E.Smythies'. One of the many things that the Reverend was into was the 'Central Farmers Club' and it was to these esteemed gentleman that he spoke to try to answer the burning question posed above. The content of his lecture was included in a book 'The life and times of Viscount Palmerston : embracing the diplomatic and domestic history of the British Empire'. In it the Reverend gentleman expounds the significant attractions of Argentina describing it as an "emigrant paradise'. He describes in some detail the life of his son and partners already over there -'...they had corn beef prepared by a Scotch servant'.... but 'the Indians are ugly customers'. In fact, records on Ancestry show that two of his sons heeded his advice and took the journey to Argentina - these were Fredrick Kinnersley Smythies (1849 - 1896) and Walter James Smythies (1852-1900). Baptism records in Rosario show at least some of the Rev. Smythies grandchildren. In 'Grace's Guide, a historical record of industry and manufacturing' can be found the 1894 Obituary of John Palmer Smythies.

Here also can see a link to a lengthy but fascinating article on the Gutenburg free library entitled 'Argentina from a British point of view' containing many interesting photos and insights into the life of a British settler. Oh the problem they had getting good and reliable servants !